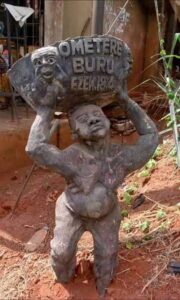 Each time I drive passed this junction around Ichida, Anambra State, I can’t help but slowed down to read from this erected effigy that preaches silently to every soul that passes through that route.

There is no other oat greater than. This is an administer by yourself for yourself.

“Ometere Buru” is a popular slogan in the Igbo language used by both Pegan and Christians. It can be best explained looking at the sculpture. It is all about the load, the owner and the carrier. The owner of the road is carrying and he or she is feeling the heaviness of the load as depicted in the moulded image.

Watch the statue properly. The load on the odd-looking woman’s head represent all the things she has done in her lifetime. The heavier the offense, the heavier the load and vice versa.  Whatever one does in life must surely be followed by a reward. The most important aspect of this statue is that the doer will carry it by himself on his own head.

The Christian faith believes in this too. It was affirmed in Ezekiel 18 in verse 4b as written on the sculpture. It says; “The person who sins is the person who will die (NIV)”. “The soul that sins shall die (KJV)”.

It is affirmed in another chapter of the Bible this way; “He who breaks a hedge, the serpent shall bite”.

This is actually the true meaning of Ometere Buru sculpture. It means in its simplest form; let the load owner carry it. It also means that every man and woman will be paid in their own coins.