The killing of 5 men and women in a drinking joint at Obiofia village, Osumenyi by the unknown gunmen has put Osumenyi town once again on the map. Many people are searching to find out about the town. Here is About Osumenyi Town – Most Developed City in Igbo Land.

First of all, Osumenyi town is the top 10 among the most developed and beautiful towns in Igbo Land. You can read it up here. Osumenyi is one of the 10 towns in Nnewi south Local Government Area of Anambra State. It shares common boundaries with Ukpor town, Unubi, Akwaihedi, Ebenator, Utuh, Amichi, all these towns are under Nnewi South.

If not for the age-long acrimony which has divided the town into 2 factions and led to subtle war, the town would have become the African China today. Osumenyi was governed by an umbrella bdy known as Osumenyi Town (Association). It has existed before the emergence of Osumenyi Development Union (ODU). Strong attempts are being made to reconcile these warring factions for the peace and the progress oo the town.

The 2 groups form paralell government and elect its own President general and other stake holders.

Osumenyi town is the hometown of the most Igbo billionaire businessmen like the owner of EFAB Estate and Properties, the Bolton White Hotels, Abuja Boss, the Ukachukwus and the rest. Read: Osumenyi Agog as the Remains of the wife of Anambra Top Politician, Barr. Mrs. Nnenna Ukachukwu Lies in State.

Osumenyi has hard working and well to do sons and daughters who Transact businesses across Nigeria and the town is surrounded by greenery and farms with homes of nuclear and Extended families. They were among the first who ventured into estate developing in Abuja after the Federal capital was moved from Lagos state. 70% of their wealth are made from estate Developing.

Igbo people living around here live in families close to each other and are Christian oriented with a very Rich Culture. It is located along Nnewi-utuh/Amichi Road. Osumenyi formally occupies the large area east of “Eke-Osu market” sharing common boundaries with Ekwulummili, Unubi and the area presently called Ogbodi. On the southern end,the boundaries are with Akwaihedi and Ezinifite, while she is bordered to the west by Ebenator and Utuh.

The total number of villages both the old and the new are 25. However, some of the new ones are not fully recognized and accepted as they were created and carved by warring factions. 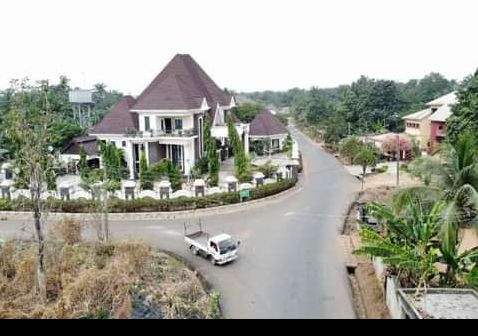 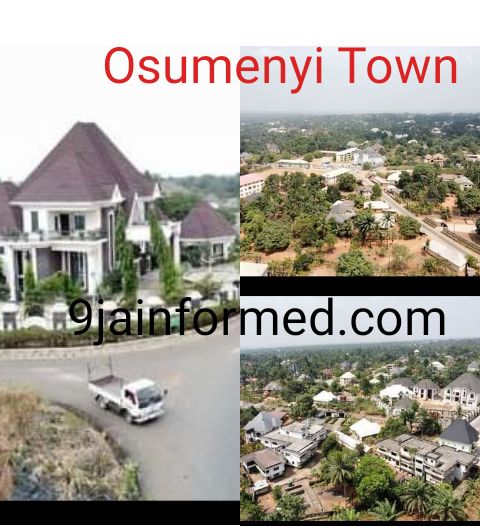 There are markets in Osumenyi. They are Eke Osumenyi, Orie nwodikpi. But Orie nwaodikpi did not see the light of the day. It ended before it began selling (the popular osumenyi slogan; “o zuola ka Orie nwa odikpi”. Meaning, the stuff didn’t last.

She now relies on Eke osu to do all her buyings and sellings. At the mid- market days that is not Eke, the market buys and sells but calls it Eke ogbachu or Afor ozulu.

Osumenyi Market day is “EKE” and her Popular Market is Known As EKE-OSU”. It Stand Head and Shoulder Above every other Markets in Her Environs and other Towns’ Markets under Nnewi South L.G.A. Even Nnewi indegenes come to trade in Osumenyi Eke.

Osumenyi is among the Towns that are refered to as “Mbammiri”. This is because of the fact that they live ‘on the water’. Yes. Water gushes out from every corner in their bushes. And they are surrounded by streams. They are blessed with many mineral resources which are yet to be harnessed. One of them is stones and special sands.

Osumenyi town is beautified with natural green trees that shade the quiet village life from the blazing effect of the sun. Among the common trees are Palm trees, Pear trees, kola-nut trees, Plantain and Banana Trees, Rubber trees, Pineapple orchard, Iroko trees, Coconut Trees and many other fruits yielding trees.

He married two wives. His first wife had three male children whose names in order of their birth were Adazi-Enu, Adazi-Ani and Adazi-Nnukwu. The male children of Okotu by his second wife were Ichida, Amichi, Osumenyi, Ogbodi and Ikenga.

There were movements of the sons of Okotu to find plots of land for settlement. Osumenyi and his brothers decided to migrate south towards the present location she occupy. Osumenyi was a typical traditional society. The townspeople were governed by Ozo title holders. The ozo title holders had strict rules of conduct which include telling the truth all the time & keeping secrets.

Here are the variuos Ozo titles the bindegenes Osumenyi town confer and hold:

Osumenyi enweghi eze. Meaning, Osumenyi town has no king. Oh, sorry, I forgot, there used to be a king. But that was before the colonial era. The whiteman came and appointed a warrant Chief and altered the age long Kingship by hereditary. When the whitemen left, the family who was holding the position of Warrant Chief refused to step down for the continuity of the statusquo.

When the elders saw that it was bringing division among the town’s men and women, they introduced system of government by election. Representatives from different villages were presented and voted for to hold the post of President general who is known as the town’s High Chief or President.

The Following men have ruled Osumenyi town as High Chiefs:

It is on record that after these men, the town began to produce two President general by the faction governments.

A taboo is something declared forbidden either for its sacred nature or to protect the people of a given community from the wrath of the gods and the leaders. it also a part of any culture and of tradition  because it brings a sense of sanity and reverence to certain things in the community. Read also: No Matter What, Women Are Not permitted To Do These 6 Things In Igbo Land.

There are many taboos(“do’s and “don’t’s”) in Osumenyi such as:

It is considered a taboo to whistle at night because this act is considered to lure snakes into the home, and also attract evil spirits that roam the night.

It is forbidden for a woman to live with a man without the proper marriage rites or without the due approval and approval of their parents. A respectable man is expected to pay the dowry or bride-price of his wife before or shortly after starting to live together, or the woman will lose respect in the community and may face problems of poverty, retrogression, sickness and death among others.

It is a taboo to have sexual relations with one’s blood relations or with sisters from the same parents. This is frowned upon by everyone in the community and must never be attempted by anyone.

Kolanut is considered a sacred nut and must never be broken or shared by a woman. A kolanut must only be broken, blessed, and shared by a man because “he that giveth kola, giveth life,” but never by a woman because it is a life-giving nut of the gods.

Cultures and Traditions practised in Osumenyi are not different from others seen in other towns in Igbo Igboland. However, there are bit differences. For example, Osumenyi does not give out a child that is born out of wedluck to the man who impregnated the mother. Even if the mother later got married, the child is treated as her brother or sister because he or she will take the surname of the woman’s parents. They do not give out a pregnant woman in marriage. The woman will first deliver the child in her father’s house before marriage. (The last sentense no longer holds for many families).

Woman to woman marriage is accepted in Osumenyi town. But this is not a form of lesbianism practice. You can read more on that here.

New yam festival known as “Afiaolu is celebrated every August, annually. The town has various cultural dance troops, village by village. The most famous among them is “Atu masquerade”.

They also have their unique ways of greeting and exchanging pleasantries. Like they greet ” Ada oo” to every female child. When a young person sees an elderly woman he / she say “muonne” and the elderly woman responds “oo nwa m”. The same goes to elderly man also “muonna” and he will answer “oo nwa m”.

Every female born in Osumenyi is seen as Ada and when ever the men or fellow daughters who happen to be the junior see her, they greet as “Ada ooo” while she will answer “ooo Nwanne”. Every married women greets their hushand’s kingsmen “Nnamuoo” and the man will answer “Orieaku”.

When a child visits their mother place, he is seen as nwadiala and can never be harmed. He or she greets every man from that place nnaochie and the women not the ones married there but the real daughters is greeted; “nneochie” and they will respond “ooo nwadi”.

Indegenes of Osumenyi are mainly Christian worshipers. Very few still worships idols and nature. Anglican and the Roman Catholic denominations are the most dominated churches in the town.

Thanks for reading. This is it for now. If you are born in Osumenyi and you know one or two histories that are not included in this piece, drop your comment politely in the comment section.