You dont have javascript enabled! Please enable it!
Skip to content
Money & Business
9jainformed
No Comments

Who is the Owner of Bolton White Hotels and Apartments, Abuja? 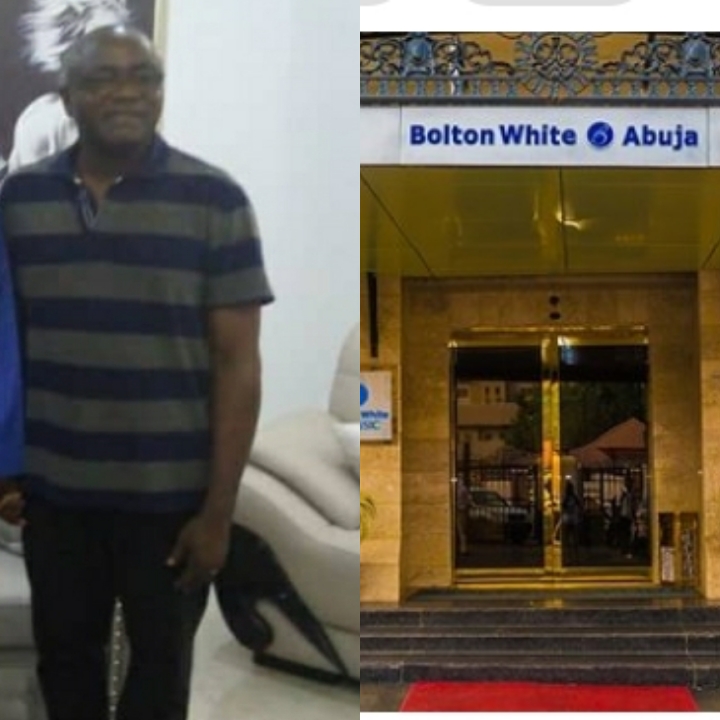 Chief Polycarp Obiukwu aka Nnabuenyi is the Owner of Bolton White Hotels and Apartments, Abuja. He is an Estate developer and a philanthropist.

He is the owner and Chief Executive Officer of Bolton White Hotels and Apartments, Abuja? His name is Chief Polycarp Obiukwu aka Nnabuenyi. The magnificent first-class hotel is situated in the heart of the Federal Capital Territory, Abuja.

He was formerly known as “PolyNat”  Obiukwu because of an old business venture he co-owned with his Master after doing apprentice. The name simply a combination of Polycarp and Nathaniel.

Chief Polycarp Obiukwu is a staunch Roman catholic church member. News had it that when he buried his 81-year-old mother Roman Catholic Priests flooded the burial venue.

Chief ‘Polly’ Obiukwu as fondly called by people is a native of Osumenyi in Nnewi South Local Government, Anambra State. He is the first son of the Late Mrs. Margaret Obiukwu. He has other 3 brothers and sisters.

He had his basic primary education in Osumenyi and later traveled to Aba for an Apprenticeship (Igba boi). He served Mr. Nath Nnakenyi who was into the business of Ladies’ bags.

He was set free when he completed the agreed years of services in the house of his master. He was settled to begin his own line of business. Due to his diligence and hard work, his master did not let him go. Both joined forces to form a business “PolyNat” Ventures.

However, Chief Polycarp Obiukwu switched to another line of business when “Ahia Akpa” as it was called was no longer favorable. He relocated to Lago state and ventured into the Electrical business.

From the Electrical business, he switched again and this time, he moved to Abuja for the Estate development business with his other town’s men like  Chief Fabian Nworah (Efab Estate), Prince Nicholas Ukachukwu (Prince and Princess Estate). They got contracts from the government to develop Estates in the heart of the capital city.

Chief Polycarp Obiukwu built Bolton white hotels when he saw that the hotel business is lucrative and booming in the country. It appears he has finally settled for the hotel business alone since it is yielding the desired result.

Chief Polycarp Obiukwu does not look his age. If you see him for the first time, you will mistake him for a young guy. The very first day I visited Bolton White Hotel after my Wedding with my husband, I saw two men on the managerial seat and bowed while greeting them.

I didn’t know who was who. My husband whispered in my ears when he noticed my confusion that the other first guy was his second son.

Polly may look young however, he is a grandfather. Bolton White Hotels & Apartment’s boss is in his early 60s. He was born around 1958 or thereabout.

Chief Polycarp Obiukwu is married to Lolo Kate Obiukwu. The union is blessed with 7 children, 3 boys, and 4 girls.

Polycarp Obiukwu is a philanthropist. He made headline news during the first wave of the Covid-19 pandemic when he donated 1 million Naira to the Anambra State Government to help cushion the effect of the pandemic.

He is an Estate developer and the popular Bolton white hotels owner. He has developed uncountable magnificent buildings in the federal capital territory which he resold.

There is no available information or data on the internet regarding the net worth of Chief Polycarp Obiukwu. This notwithstanding, Chief Nnabuenyi worths Billions in naira.

Chief Polycarp Obiukwu is not a noisemaker. He is a quiet Igbo billionaire. He is one of the big fishes in Igbo land.

According to records, some of the property amenities at Bolton White Hotels & Apartments worth about $60 million. I am not surprised about his. The first day I visited the hotel, I saw the Nigerian Super Eagle team. They were lodged in the hotel.

10 Infinix Phones With Side Fingerprints in Nigeria 2022

Bike Logistics Business In Nigeria: How To Start Explained (2022)

Gold Business in Nigeria: How To Start Investing In Gold Explained (2022)

POS Business In Nigeria: A Comprehensive Guide To Starting The Business (2022)

Watermelon Farming Business In Nigeria: How To Start Explained (2022)

Pure Water Business In Nigeria: Cost and How To Start Explained (2022)

Solar Energy Business In Nigeria: Everything You Need To Know Explained

How To Kickstart Block Industry Business In Nigeria (2022)

How To Start Phone Accessories Business in (2022)

How much does it cost to start a cooking gas business in Nigeria?

What is Wakanda inu? When was Wankanda Inu launched? Trending Meme coins