6-Year-Old ‘Pregnant’ Girl, Olga Blessing Receives 1.3 Million Naira for Treatment. This information was shared with the public via the Malawi Facebook group page.

Olga Blessing, a 6-year-old ‘Pregnant’ girl who was alleged to be expecting a child has been given 1. 3 million nairas from charity donations to help her mother take care of her. The little girl was caught with a disorder and almost everyone that sees the little girl thought that she is pregnant.

The ‘pregnant girl’ suffers from a rare medical condition that makes her look like a pregnant woman. She was diagnosed with a strange illness last year 2019.

It all started when she started feeling too much abdominal pain. She visited some clinics, where her parents were told it was typhoid fever and were prescribed some medication.

After taking all the medicine prescribed by the clinic, no changes, and instead, they discovered some swelling in her body, and even her legs started swelling.

After She Gave a Mad Man Food in a Restaurant, Here is How He Made Her a Millionaire

Olga Blessing was later admitted to the hospital for a month. The doctors, after running different diagnoses, confirmed her of having Congestive Heart disorder. This bad news made Blessing’s mother, Augustina to break down. The doctor also added that the disorder involves the heart valves.

Medically, it is explained that when a normal and healthy human being is breathing, the heart valves open and close. But in the case of her Blessing, they are always open and that is the cause of her protruded abdomen. This is actually what made her look pregnant. 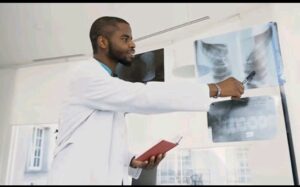 The little girls’ father was frustrated. He abandoned the family and ran away. leaving Blessing in the mercy of the helpless mother. He woke up and told them he was going to work. He left the house and never returned.

Blessing Olga’s case became worse. The doctor who was treating her said the girl can only get help abroad and advised the mother to seek means to fly the dying girl abroad for medical treatment.

The poor woman turned to social media for assistance. Olga’s video was uploaded to YouTube. In a short time, over 1.3 million was donated from kind individuals for her treatment. She has been given the money. 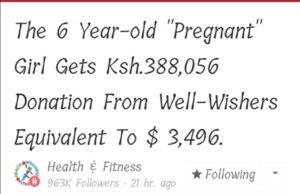 Pray for little Blessing for quick recovery. Thanks for reading.