I have decided to do a little dig about Ejike Little Prophet as he is called. But the fact is that there are few things about him available on the internet.

I was able to find his Facebook page; Little Prophet Entertainment. He devotes the page for entertainment like hangs out with friends, his jokes, and proverbs. He also uploads some of the music he sang with his music group. Unfortunately, I couldn’t find useful information about him there.

According to the recent interview he granted to BBC Igbo News, Ejike Little Prophet is currently 14 years old. He is in Primary 5.

He may look little as his name actually implies but he has the spirit and the wisdom of an old man. He eats Igbo proverbs the way children consume candy sweets.

He tells everyone who cares to listen how he was born in his first world in Umunnya in Anambra State. He said he came into his first world and did the work of divination (Igba afa) for the people.

However, he said he died poor because he couldn’t make ends meet in his first world. He was a poor diviner and native doctor.

So, when he died he reincarnated in Ifite Awkuzu where he wishes to continue with his former work but he said he wishes to do his in God’s way. When asked what he would like to become in life, he said; “achoro m ibu onye amuma. A chokwara m ibu a musician”. “I want to be a Prophet like Eddy na Nawgu and a Musician”. he said.

He said, he mingles mostly with adults and that is how he learns more. “Children like my mates play a lot. You will learn nothing when you join them”. He confessed.

Looking at Ejike Little Prophet’s facial and body stature, you may notice few abnormalities in his feature especially his sight. The mother, Mrs. Jacinta told BBC Igbo that his son wasn’t born that way.

It was when he was nine months old and he was taken for an Immunization in the hospital. After the Immunization, his son couldn’t see again and he became abnormal suddenly.

She said he was taken to different hospitals. However, the last consultant they met who was a Whiteman advised them to take him home, reassuring them he would see and get better as time goes on.

It actually happened as the consultant predicted. He started seeing later and began to work but he was not the same. 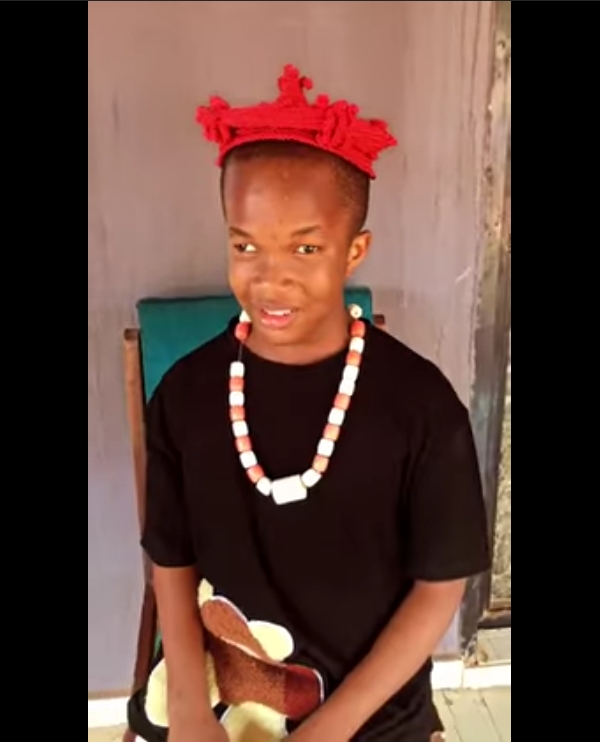 People travel from far to Ifite Awkuzu, his hometown to look for Ejike little Prophet to do divination for them. His mother confesses all he says to his clients always comes to pass.

Ejike Little Prophet may speak like an adult but he is still a young teenager. He is just 14-years-old.

Yes. He is a little boy inside the skin of an old man. However, he is still in primary school.