You dont have javascript enabled! Please enable it!
Skip to content
STORY (SERIES)
9jainformed
No Comments

I am 24 years old. I have an addiction that is driving me crazy which I will like to share with you. Perhaps, your opinion, suggestion, and advice may take me out of this messy life of mine. Red Pantie Addict – A True Life Story.

I am an addict, not to any substance or to any food. I am an addict to pants, women’s inner pants. Not any kind of pants, red pants. It has become so bad that I steal red pants anywhere I see them.

I have been caught twice in the markets. Each time I bought red pants, I saw myself stealing additional ones. Each time I move around and see red pants on shelves, I will change my destination and schedule and branch into the store. With or without money, either I stole it or I bought it.

Back on the campus while I was in the higher institution, I was known as a red pant hawk. I searched in my roommates’ bags and stole their red pants. They caught me on different occasions and I kept begging. The mature campus Chicks went a long way in buying additional red pants for me as they bought theirs and begged me not to steal theirs. But that spirit would always be stirred each time I saw them spread it on the rope. Like a hawk, I would land and made them disappeared when no one was looking.

How It All Started

I started having a flare for red pants when I was a little girl; when I was living with my maternal Grandma.  I didn’t know it will lead me into this kind of messy life. I started stealing red pants as a small girl but not from the market. I stole it from my big aunt, I would use a needle and thread to slim fit it.

No one in the family knew I was the hawk who stole the missing red pants until one day when my cousin, Uzoma, visited. She came to spend some time with us.

She had visited during the dry season when there was water scarcity. She came along with her dirty dresses and pants. She would wash them without having to go for a long distance to fetch water.

There was a big dug plastered tank in the neighborhood. It was owned by our grandfather’s brother, so access to it was no problem.

During rainy seasons, water was collected and stored in the cooling tank. The tank was big that it served us round the seasons including the outsiders who came begging for water.

On that afternoon, when we had filled our drones with water from the tank, Uzoma began to wash her clothes. I was not interested in what she was doing. I loathed washing clothes. I hardly washed mine. I wore them until people began to jeer at me or drive me away. I would manage to wash and waited for it to dry or wore it wet or half-dried. I constituted a nuisance a lot.

I was playing and running around with other children when I ran to the back where Uzoma spread her washed clothes. She was still washing but she hanged the few she had washed. I noticed in amazement that she had many pants, pants in various colors; spotted and designed with my favorite color.

For the first time, I began to ponder about pants – my pants. So, one person can have pants as numerous as these? I pondered.

“Where are my pants? How many are they?” I asked myself but could not answer these questions. I had pants, not one, not even two or three but I didn’t know their accurate number or their whereabouts.

But I knew of two red pants – my favorites. One was under my waist; the other was on the fence, at the back where we took our bath. Others were found and worn by luck or accident.

There was a time I found one of my pants on the farmland when we were cultivating on the land. It was the flood that took it to that location. It had picked it from the compound through the water-way, under the fence and buried it in the earth.

Are you asking whether I took it home afterward? Of course, yes. I washed it and wore it afterward.

Uzoma’s pants looked beautiful, neat, and new. A thought came quickly to my head and I obeyed it. I went closer to the pants. They were still dripping with water, I didn’t care. I took one dark red pant, wore it, and walked away. But I was not satisfied. I went back again, picked two more, a pepper red, and stripped red colored pants. I wore them; added to the first pant and the stinking one under my waist which was mine.

So, in total, I had 4 pants under my waist. One was mine and the rest were Uzoma’s. I walked away and joined the rest of the children in the play.

When Uzoma noticed her missing pants, the pants ultimate search began and I was the “Ezeugo” in the search. I brought out my ghana must-go bag of clothes to be searched. But nothing was found. I suggested we went over the fence to see if she poured it away with the water. But the girl was sure of what she was saying.

The spaces where I took out the pants were very visible and she kept pointing at the spaces on the rope. What I didn’t know was that Uzoma was suspecting me as the thief but she lacked the confidence to say it.

When she couldn’t find the pants, my Grandma ordered her to stop the search. She was of the opinion that Uzoma left the pants in her house. She obeyed Grandma but we didn’t know she had option B.

Uzoma was my senior by far. What she did that fateful day and how she retrieved her pants from my waist showed that I was a child and a child cannot trick an adult. My Grandma didn’t say much about this naughty attitude of mine. She told Uzoma to forgive me that I was a child. She scolded me not to repeat the act.

I am now a grownup. Today, I have grown up with the evil act. I am a red pants addict. 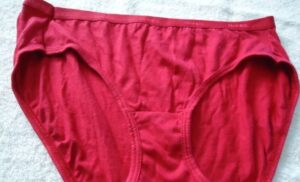 Yesterday, I saw myself at an accident scene. While others were looking for ways to save the lives of the accident victims, I saw myself opening the women’s dresses to see who had red pants under her. I finally found one and stripped the pants off her waist and went home with it.

What will you call this? The flare I have for red pants is driving me crazy. What shall I do? Who can help me?