It’s another Derby match in the premier league as Manchester United will be hosting Chelsea on Friday at the Old Trafford. Over the weekend, Manchester United lost in an away contest to Arsenal by 3 goals to 1. Recently, Manchester United’s current form is obviously affecting the performance of the team. Manchester United Vs Chelsea –  Team Review, Predictions. Read: Barcelona Vs Rayo Vallecano 0:1 – Match Report, Summary, Highlight.

They lost 4 matches out of their last 5 games. Regarding their poor performance, they are likely to lose position on the league table. Due to the poor performance and lack of teamwork, the team is gradually losing credibility.

Fans are beginning to get pissed off by the lack of good results portrayed by the team. Ralf Rangnick needs to look inward so as to easily figure out and fix the situation in the team before the end of the season. Trending: Latest News on What 86FB is all About: Ponzi or Real?

Taking a brief look at the Blues, they have really put up a very impressive performance so far. Despite losing to Real Madrid in the Champions League, they still maintain a very good form that could earn them the top 4 position in the premier league table by the end of the season.

Chelsea have been able to secure 4 wins in their last 5 games. Some influential players won’t be available in the Chelsea squad against Manchester United. Comparing their current form to that of Manchester United, it is very obvious that Chelsea have a high possibility of getting a victory at Old Trafford. Thomas Tuche is ensuring that his side keep getting victory in most of their matches regardless of the few injured players in the squad. 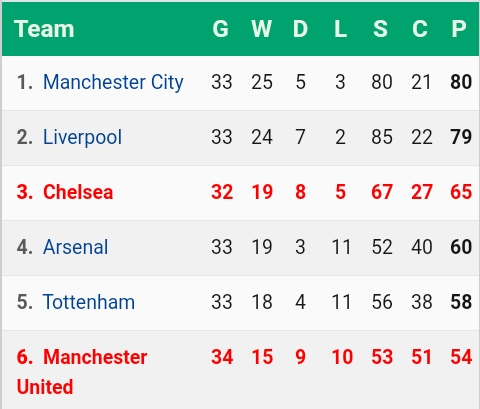 Taking a look at the premier league table, it is very obvious that Chelsea have what it takes to achieve victory at Old Trafford. Chelsea still maintaining the 3rd position will have to keep winning every match so as to remain ahead of Arsenal who are also not relenting. Manchester United is not as vibrant and impressive due to the number of losses they have encountered currently in the premier  league.

Chelsea have been able to outshine Manchester United in terms of goals and winning streak  they’ve had in the past.

Also, their current form has a major impact on the decision making in regarding this match.

The probability of winning is very slim.

Best prediction for this game would be

In the past few matches they have both scored more than 1 goals each. I would also suggest: