You dont have javascript enabled! Please enable it!
Skip to content
ENDSARS
9jainformed
No Comments

Enugu state government has issued a public notice to all residents of Enugu state, announcing a 24-hour curfew which commenced at 7 p.m Wednesday till further notice. 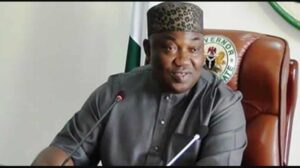 This announcement was made known by his Special Assistant on Media and publicity in the state, Mr. Louis Amoke via Facebook. The three local government areas are Enugu East, Enugu North, and Enugu South.

Enugu State is in the hands of God”.

Meanwhile, protesters have disregarded the information and continued in their protest even as at the time of documenting this.

The curfew is to restore peace in the state as the protest took another dimension today. Sporadic gunshots were on the air throughout this evening. In Igbariam, two protesters were feared dead.

#ENDSARS: The Sad Story Of Pretty Miss Agu Who Was Crushed By A Car While Protesting In Lagos State

The 7 Evils The EndSARS Protesters Committed In Enugu State

ENDSARS: These Are The Aba Boys Who The Military Shot At But The Bullets Couldn’t Penetrate

ENDSARS: This Is The Video Of Okuzu SARS Prisoners That Fueled The EndSARS Protests In Anambra State

ENDSARS: “The Blood Will Be Upon Their Heads”. Apostle Suleiman Reacts On Lekki Massacre