ENDSARS protest goes diabolical in Aba. In Aba, Abia yesterday, there was an eyewitness account about some groups of Aba boys who were confronted by the Nigerian Military. It was alleged that they were fired several times but the bullet could not penetrate. 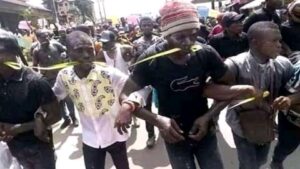 This group of boys was fired at by the military but none of the bullets hit them. It was rumored that the boys engaged the Army fire for fire chanting; “I bu onye e ji atu gi ujo“. Meaning, who are you that we will be afraid of you? The boys were seen holding hands and moving towards the Military as they fired at them.