The ENDSARS protests in Enugu today has gone out of control as the angry protesters invaded the Roman Catholic adoration ministry owned by Reverend Fr. Ejike Mbaka, drove every worshipper away, and set it on fire. 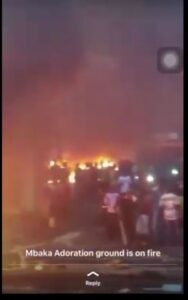 The Protesters in Enugu has defiled the 24-hour curfew placed by Governor Ugwuanyi, the governor of Enugu state.

This claim was also confirmed by some youths who said they cannot set adoration ground on fire.

Adoration ground is personal Ministry owned by a Catholic Rev Father, Rev Ejike Mbaka. It is located at Emene in Enugu State. People from far and near, Catholic and non Catholic faithfuls go to receive prayers there.

The rumour and anger to set the adoration ground on fire was fueled by the alleged Mbaka open support to President Muhammadu Buhari and his recent political prophecy.

So, during the #endsars protest, the irate protesters saw it as an opportunity to get to the Rev Fr., by setting his ministry on fire.

Meanwhile, this rumor has been dismissed as a just mere rumour. Mbaka Adoration ground was not set on fire.