Mkpuru Mmiri – Methamphetamine or Meth – Killer of the Youth

⇒ WATCH THE VIDEO OF A BOY WHO KILLED HIS FATHER AFTER TAKING MKPURU MMIRI AND HOW HE WAS KILLED TOO BY THE YOUTHS OF THE COMMUNITY.

It is called Meth for short or crystal Meth. What You Should Know about Mkpuru Mmiri – Methamphetamine or Meth. I want to let out a bombshell in this introduction for those who will not have the patience to read to the end. The way things are going now and the way our youths are consuming Mkpuru Miri like water if nothing is done the number of mad youths in the streets will be tripled in the next 3 years.
Now, read this, for my Igbo people who are fond of dragging lands or placing values on land inheritance. In less than 10 years, if nothing is done about the rate of the smoking of this evil substance, there will be no need for land dragging. The owners of the lands will be in the streets raving mad; others will be in the graves.

Trending
Ankara Skirt and Blouse for Weddings
According to the National Institute of Health, Methamphetamine is a powerful, highly addictive stimulant that affects the central nervous system. In the streets, it is addressed as Ice or glass. So, when you hear slang like; “any glass or ice?” from a youth, shift ground, you are in a rough zone.
When you see a young guy who was normal in the morning and he starts removing his clothes in the public in the evening and acting violently, think about Mkpuru Mmiri. What You Should Know about Mkpuru Mmiri – Methamphetamine or Meth.
ATTENTION!

⇔ Did You hear about Combining Tom Tom Sweets and Cold Water? This is what they said It does to the body

Whenever you hear about crimes like a young boy or girl cutting someone into pieces with a knife. Or when you see a gory picture of heinous crimes and they are attributed to youths, take a minute and consider if it were committed under the influence of mkpuru mmiri  – Meth.

After witnessing the effects of this hard drug called Meth aka Mkpuru Mmiri one Christmas period, I was pushed to write an Igbo novel which I titled: “Lee Anwuru, Lee Isi mgbaka“. When translated, it means, Madness and Meth are close-door neighbours.

Apart from the Novel Covid-19 Pandemic and the incessant killings in the country, there’s another pandemic going on in Nigeria. It is a silent killer and it is sweeping through our neighbourhoods — from the high borough of the elites to the slums of the most vulnerable and downtrodden of our society and nobody. I mean nobody, not even the government is showing concern.

Mkpuru Mmiri is the Name of the Hard Drug Our Youths are now taking that is bringing out the beasts in them and in some cases, entangles the wires ‘vein’ in their brains. I would have loved to borrow the word which my husband uses to describe the instant effect of the hard drug.

He will always point to me and say; “lee nke a, ọ ṅụrụ Mkpuru Mmiri, o tibie you akwara isi”. Meaning, look at him, he was among those that took Mkpuru mmiri and it cut the veins in his head, making him run mad.

This is not a joke or exaggeration. The youth in my village are using this hard stuff like water and their lives are not the same ever. Most of them have visibly gone ‘narco‘. You will see it in their physics, speeches and actions.

What You Should Know about Mkpuru Mmiri – Methamphetamine or Meth

I remember in 2019 when Nigeria Drug Law Enforcement Agency raised alarm in the East following the discovering of Lab in Anambra State where Mkpuru Mmiri is being produced and sold. NDLEA Special Enforcement Team commander Sunday Zirangey reportedly said that meth was a serious threat and that Nigeria risked turning into a narco-state.

As usual, we swept the early cry under the carpet and continue pursuing shadows as we are used to.  I am not here to give big medical terminologies of what they say Meth does to the person who inhales or sniffs it, I am here to tell you the damages I have seen on the users.

You, reading this post, will bear me witness that our boys in the village have been rendered useless because of the effects of Mkpuru Mmiri. I knew four boys from the same village in my community who went to sniff the hard substance during the New year Celebration 3 years ago.

As I am writing now, four of them have become useless and raving mad. I want to emphatically state here that no young boy or girl who smokes or sniffs Mkpuru Mmiri whose life will remain the same again. The hard drug takes human nature away and gives the user animal nature.

That is actually what they call being “high”. For me, that kind of being high is worthless. What is the essence of losing your full sense of reasoning for a lifetime after being high?

Meth users talk and behave abnormally. They dress dirty and look dirty. It makes them lazy and pushes them to all sorts of crimes, mainly stealing so to get money to refill their damaging brain.

Despite the acute health risks associated with its consumption – such as high blood pressure and cardiovascular-related illness – a growing number of young people in Nigeria especially in the eastern part of the country reportedly take the drug.

Mkpuru Mmiri or Meth also acts as a stimulant, which means you typically don’t sleep for as long as you’re actively using it. I am not surprised by this information. No wonder the boys who use it in my community would keep the neighbours awake. They would scream and make noise until the early hour of the morning.

A reliable source told me that each time his brother-in-law used meth, he would be knocking on their doors at midnight, calling all of them to come out for the family meeting, including the door of their 102-years granny. I am not surprised. The dangerous substance in his body makes his veins to be stiff. Why will he find sleep?

The same thing also goes with those users in my community. They never slept. They would continue to make noise each time they used Mkpuru mmiri, until daybreak. Merely looking at them, you will know they are no longer normal human beings.

What You Should Know about Mkpuru Mmiri – Methamphetamine or Meth

Health Dangers – Killer of the Youth 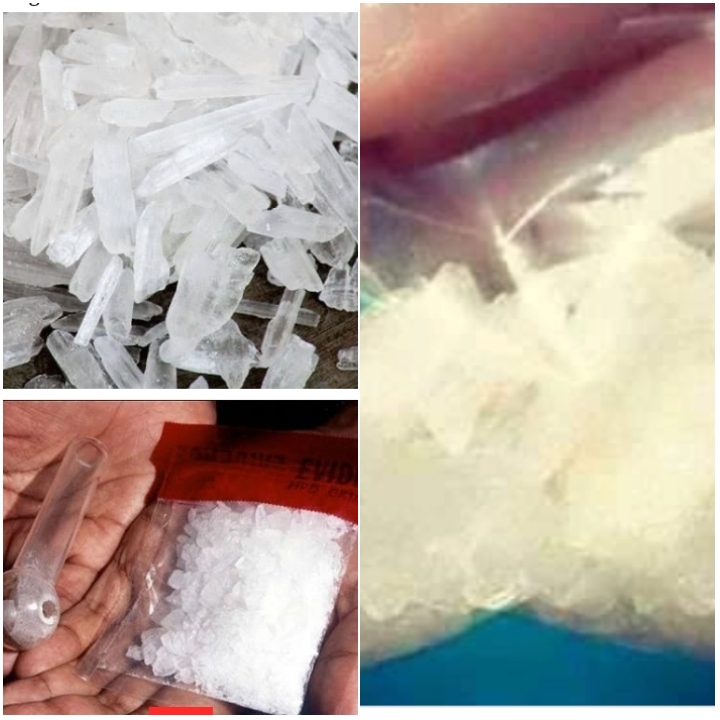 Meth or Mkpuru Mmiri hard drug substances can be taken or used in various forms. It can be sniffed just like cocaine. The street boys nicknamed it ‘aburo coke’. Meaning, younger brother to cocaine.

It can also be injected or smoked. Some are also said to leak it.

However, whichever way the evil known as Mkpuru Mmiri is taken into the body, it poses great dangers to the health. One of the visible health dangers of using Mkpuru Mmiri or Meth is that it damages the brain tissue of the users.

Mkpuru Mmiri takes sleep away from the eyes of the users. Sleep is as essential to the human body as oxygen and water.

Persistent sleep deprivation leads to poor rebound on all fronts and degrades the ability of the human mind to make healthy or timely decisions, whether they be conscious or subconscious. It also acts as an unnaturally effective appetite suppressant. We all know how damaging anorexia can be.

According to medical sources, Meth is composed of toxic chemicals and fillers which severely dehydrates the human body. You know the human body is made up of about 80% water.

Every system in our body requires hydration to function, regenerate, and perform. So, you can easily imagine the long term damage caused by persistent and severe dehydration caused by the use of Meth.

It also increases heart rate, which is detrimental to cardiac health. Any time an organ has to work harder than normal, the damage is a potential side effect.

The following are also health dangers of using Meth:

There are no special reasons why people take Mkpuru except for sheer foolishness and peers influence. No matter what is being said, there is no single health benefit of taking Meth. It is like struggling to leak the bottom side of a mortar used in grinding pepper. There is nothing found in the bottom of a mortar.

Here are the three reasons people said that made them take Mkpuru Mmiri.

Yes. I can prove this point anywhere. If you see anyone who takes Mkpuru Mmiri, he or she does not just start smoking. He just graduated to something higher.

Before the proliferation of Meth, it was Car tire. Guys were inhaling tire and rubber and becoming high. When they couldn’t hold their hands on cocaine, they embrace Meth with their lives when it proves to offer the same effect as coke.

Our youths smoke or inject meth into their body system to make them high. Yes, to become high. That is the only gain they claim to get from smoking this dangerous substance.

It makes them stand before the public and perform. it makes one commit all sorts of crimes without shame or remorse. Give it to a 15 years old boy, he can commit any crime you ask him to. he can remove an unborn baby from the belly of a pregnant woman with a weapon. he can even kill his parents.

Our youths and even men now take Mkpuru Mmiri as a bedroom booster. Some ignorantly take it to help last long;  not knowing they are digging their early graves.

Personally, I have seen users of Meth aka Mkpuru Mmiri, glass or ice. There is nothing good about it. It is the worst among the dangerous hard drugs.

So, there is no need considering to take it. Don’t smoke it, don’t sniff it, don’t leak it and don’t think of injecting it.

Those who have used it are raving mad in the streets, committing all sorts of unimaginable crimes. They are behaving strangely and talking senselessly. Their reasonings are awkward like those in the Psychiatric hospital.

A few days ago, the Nnewi community made a public announcement, signed by the Igwe to warn all the sellers of Mkpuru Mmiri in the area to stop selling the substance or leave their community. I also heard the announcer said if anyone is caught selling it henceforth, the person will face severe punishment.

I told myself that this is a welcome development. If every town in the East can borrow a leaf from ndi Nnewi and do the same, the lives and the destinies of our youths will be saved, the earlier the better.

Mkpuru Mmiri is hard and evil. Don’t allow it to hit you. Avoid companies who use it. Stay safe!

One thought on “Mkpuru Mmiri – The Name of the Hard Drug that is Wasting Our Youths; Read the Effects”