7 Wrongs EndSARS Protesters Did In My Area

The situation was somehow calmed in my area yesterday and I was able to move around Enugu. I moved into the streets in the town and shed tears. I shed tears seeing the havoc the EndSARs Protesters had wrought in the streets. After seeing them, I concluded that the main protests have ended. Those who occupy the streets now are street urchins and miscreants. 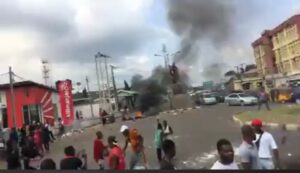 How else should I put it seeing the level of damages they did to the public properties. A normal and responsible individual cannot do such a thing. They destroyed what the politicians whom they are hunting never use. We are the users of those things they destroyed not the politicians. Those amenities are in Igbo land. If there is division today and they say all tribes should go, we have destroyed what should belong to us with our hands.

This was the highest of it. Since the erection of this bus stop by the past Governor of Enugu, I am yet to see a politician who stopped by the bus stop to wait for public transports. They are mainly used by the poor masses, you and I. We ran into them when the rain begins to fall. We sat in them to rest for a while when we are tired of trekking. We go into them to wait for buses, tricycles, and “gbaagbaa” to take us to our destinations.

The protesters have pulled these bus stops down. They did not stop at that, they broke the seal at the top and made away with the batteries that power light in the bus stop during the night.

In as much as I am condemning the ugly acts of these irate protesters, I want to be neutral here. The light in those bus stops has not lighted for one day for the past few years. In fact, for the two years that I have lived along GRA, New Market axis, I am yet to see any light on in those bus stops. But this should not be the reason for the outright destruction. It does not serve at night but they serve well during the daytime.

Now that the protests are about to be over, how are we going to manage the long vehicle queues during the work and school runs hours? The Protesters destroyed what helped to ease the movements of vehicles and pedestrians in the town.

The reason for the protest is right but damaging street light and the traffic light is very wrong. It is wrong to put the house on fire simply because the rat in the house has made us angry.  We should have pursued the rats that made us angry and catch it and not setting the house ablaze because we will still live in that house.

The flowers in many streets like the ones planted in front of CBN Bank at Garden Avenue were cut down from the root. Now, what wrong did those flowers commit? Cutting those flowers from the root did not solve any problem. Those who did it said they are targeting government property. The flowers do not belong to the politicians. Everyone benefits from it, environmentally.

The asphalt used in building those roads has been weakened by the fire. It is just a matter of little time, potholes will be created on those spots where tires were burnt.

Burning tyres on the roads in the name of protests is wrong and uncivilized. There is no protest that is more than hundreds of protesters standing peacefully on the roads. This is how the whites do/,n their own protests. They do not burn tyres on their roads.

They come out en mass and occupy the roads. There will not be movements. The burning on the roads will affect all road users in the long run, including the burners. 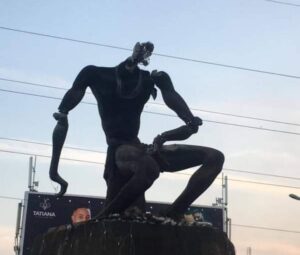 This image is known as Otigba. The effigy was used to name one of the junctions in Enugu town known as ‘Otigba Junction’. The angry Protesters broke the head of this image, broke the hand, and removed the local instrument (Igba) which he was beating.

Now, what did the people who destroyed this beautiful sculpture gain? They are doing it to get to the Governor. But, is it really so? The sculptures were there before the Governor came into power. They are there for areas and street identifications. 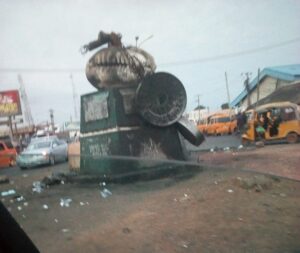 This is a molded cowry sculpture at HolyGhost roundabout, indicating that there is a market in the area. It was burnt beyond recognition.

I am sure that Governor Ifeanyi Ugwuanyi, the honorable governor of Enugu state will shed tears when he goes around Enugu State, especially when he goes to the Holy ghost. He just mounted those road wire gauge a few months ago to ward off unnecessary traffic jams caused by motorists and passersby.

These wires were torn and taken by angry protesters. They catered away with them. The blockwork demarcations were also broken and pulled down. This is wrong. When the situation calms down, we will begin where we stop. 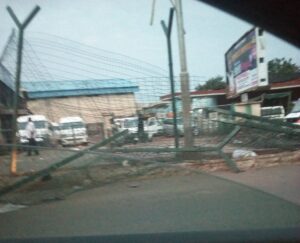 Destroying it has not brought any solution rather, it has created more problems. If the agitation for Igbo Independence were granted to us today, what happens to all these things the protesters destroyed? We will begin from the scratch.

This is the height of it. The original purpose of the protests has been abused and thwarted. What has burning police stations got to do with EndSARS? SARS has been disbanded. Why going to the local stations and setting them ablaze?

By doing this, they are endangering the lives and peace of the citizens. As it stands now, no one goes to the police to report a criminal case, no matter how serious it may be.

In summary, EndSARS Protests began well. But miscreants joined in the protests and spoilt things for us. They are a lot of atrocities committed recently in Nigeria in the name of EndSARS Protests which I didn’t mention here.

You can narrate how the protests are going in your areas and point out the wrongs the protesters are doing.

Thanks for reading. Remember to share so that people will see it and learn to protest with their senses.