Few hours to the D-day given by the controversial River bather Anambra-based Prophet, Pastor Onye Eze to raise the dead from the Mortuary, here is a new development. Anambra State Govt Warns and Threatens to Prosecute Pastor Onye Eze Jesus over Indecent Religious Conduct.

Anambra State has warned and alerted the public against Criminal and Indecent Conduct in the Name of Religion by clout known as Pastor Onye Eze Jesus (King who belongs to Jesus) aka Aka n’asa Uchu (The hands that wash away Never-do-well”.
Pastor Onye Eze Jesus is the Anambra-based self-acclaimed pastor. He is the founder of The Children of Light Anointing Ministry, based in Nkpor, Idemili North Local Government Area of the state. Here, he performs most of his rituals in water using the name of Jesus. Every week, he releases the videos of his clients whom he bathes in the river in the name of deliverance and changing of economic Status.
The Youths are mostly his clients, especially young men. In one of the Videos he released on his page, women were also seen bathing naked in the River in the midst of groups of men. The Pastor was overheard saying in the video; bathe, bathe and wash away uchu (poverty and curse).

Videos of Pastor Onye Eze Jesus Bathing his members in the River.

His manner of ministerial practices goes against the law of the government especially his way ways of uses of the naira notes. It is on this note that the Government of Anambra State is set to take action against him and get him prosecuted if found guilty. This statement was signed by C. Don Adinuba, Commissioner for Information & Public Enlightenment, and was made public via Social Media.
The Statements read in parts:

“Warning against Criminal and Indecent Conduct in the Name of Religion

1. The Anambra State Government is in possession of some videos produced by one person who goes by the name of Onyeze Jesus based in Nkpor, Idemili North Local Government Area of the state, where he not only claims to change the economic status of his adherents by magical means but also throws a lot of Nigeria’s currency notes into the river and compels his adult followers, both male and female, to bathe naked in the river and records them on video which he distributes gleefully to all manner of people through the Internet and other means.
2. The State Government is appalled at the conduct of this man. Anambra people are famous throughout the world for their industry, knowledge, ingenuity, perseverance, a high savings rate, and an infectious business drive, all combined to enable them to achieve tremendous success in various fields. Their success is not overnight nor through magic.
3. Onyeze Jesus promotes superstition and strife in society. By telling his gullible and brainwashed followers that their misfortune is caused by family members, relatives, friends, and business associates through magical powers, he is fomenting serious troubles and instigating eternal enmity in various places and businesses. Some of these troubles can lead to physical fights, bodily injuries, and even deaths.
4. By throwing plenty of naira notes into the river regularly as part of the sacrifice to the river goddess and filming it and distributing the film to the whole world, he has brought Anambra State into global ridicule and, worse, gregariously committed a criminal offense. Burning or destroying the naira through any means is an offense criminalized by the Central Bank of Nigeria Act of 2007, and the offender is liable to imprisonment.

5. By forcing his disciples to have a bath naked in a river, then film the naked adults and distribute the videos across the globe, Onyeze Jesus is guilty of denying his followers the right to self-dignity and of promoting indecent exposure, which is a crime under the Nigerian law.
6. We have received reports from former disciples that Onyeze Jesus has swindled them of their hard-earned resources, that is, all the promises and assurances of turning them into overnight millionaires have proved to be fraudulent. The State Government is looking into the claims. If we find merit in the claims, he will be prosecuted in accordance with the law.
7. The people and Government of Anambra State are irrevocably committed to fundamental rights of freedom of worship and freedom of association as well as freedom of conscience. However, observing these freedoms should not lead to a situation where heinous crimes will be carried out with impunity, whether in the name of religion or not.
8. Anambra State is a modern society governed by the rule of law, civilized values, and proper conduct. The government will not stand akimbo watching while an individual or a handful of individuals flagrantly abuse its values and flout its laws.
9. We wish to thank numerous individuals and organizations alarmed at the conduct and claims of Onyeze Jesus and his cohorts and complained accordingly to the appropriate authorities. We assure them and millions of our people that appropriate action is being taken.
God bless Anambra State, the Light of the Nation.
Signed
C. Don Adinuba
Commissioner for Information & Public Enlightenment.

Meanwhile, it appears all these are making Pastor Onye Eze Jesus become popular as his fans on Facebook page increases daily. Many Desperate help-seekers are seeking how to get his number. See the comments of his followers on Facebook on the recent post he updated on Facebook. 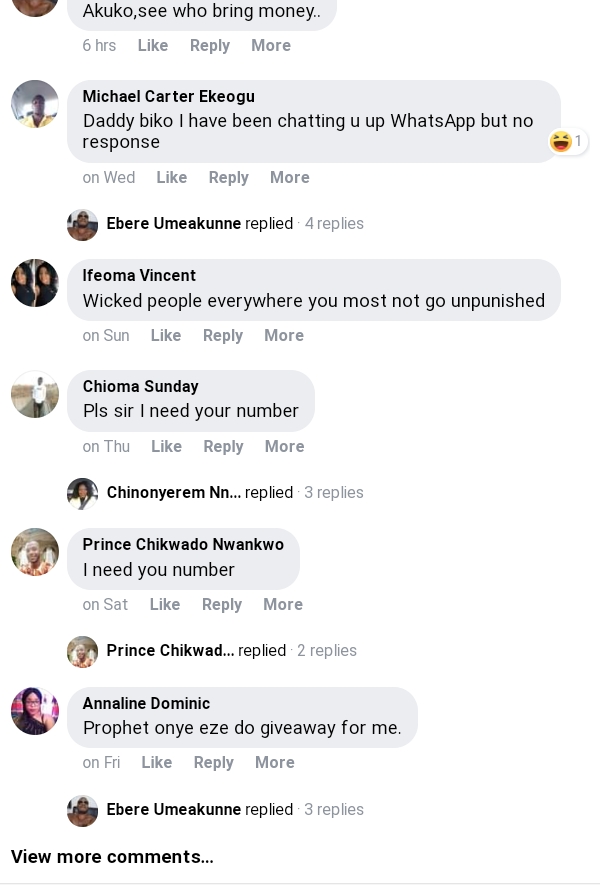 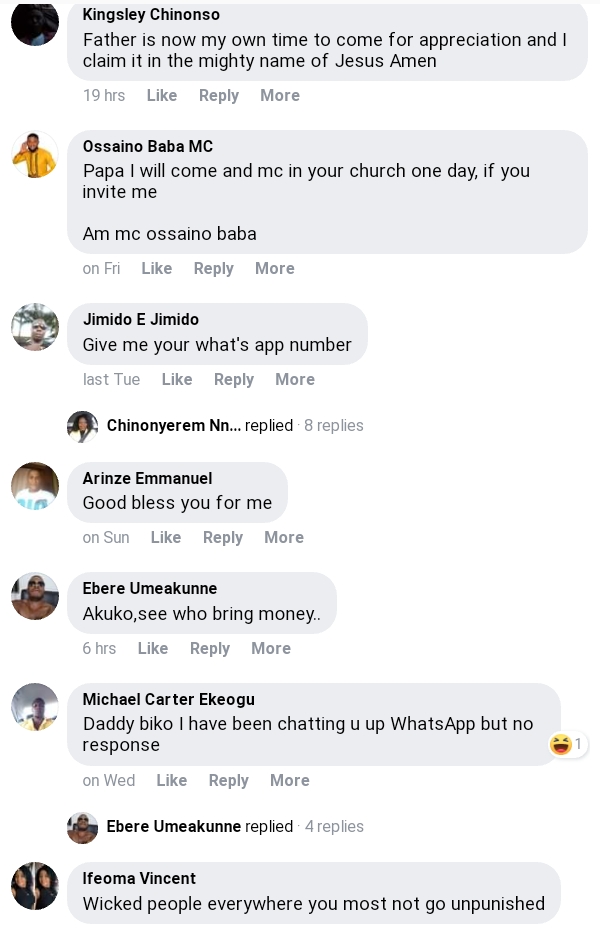 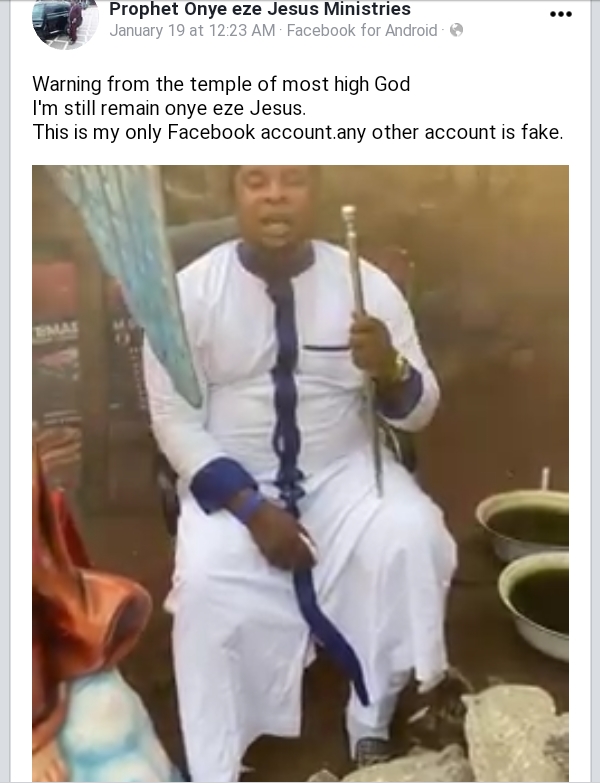 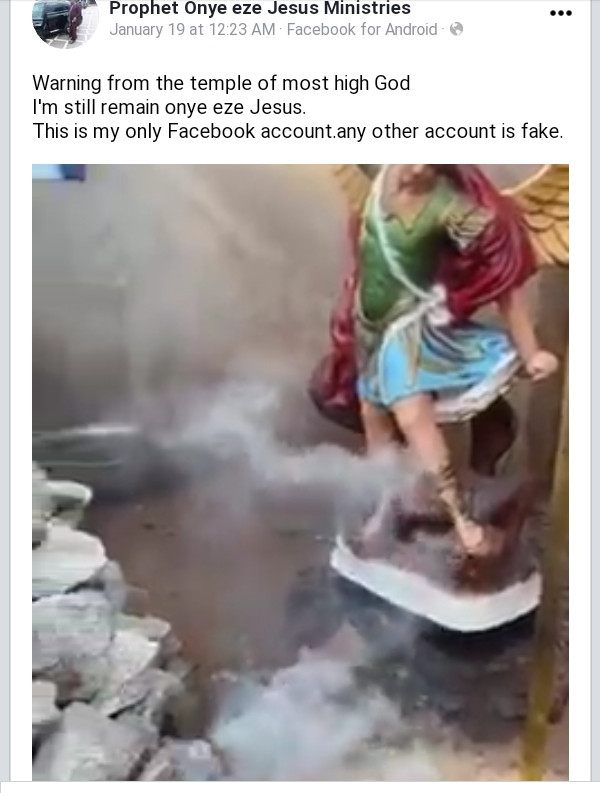 My Take
Many people are eager for ‘nbute ike’ getting wealth by all means. They are ready to patronize any kind of spirit in order to make wealth. Mind you, the spirit can make you get the wealth you are looking for. But when that spirit comes back to you to make a demand just you mad your own demand, you may not be able to give the spirit what it demands.
That is actually why Andy in Living in bondage said that Paulo didn’t explain it well for him. “Paulo, akowasiro ife a ofuma”. Dear Youths, go and hustle. Uchu is just laziness pus lack of foresight.