There have been massive shootings and heavy gun battles in Orlu, Imo State by the Nigerian Army and the Indigenous People of Biafra (IPOB). Video of Nigerian Army Shooting in Orlu Imo State Released. 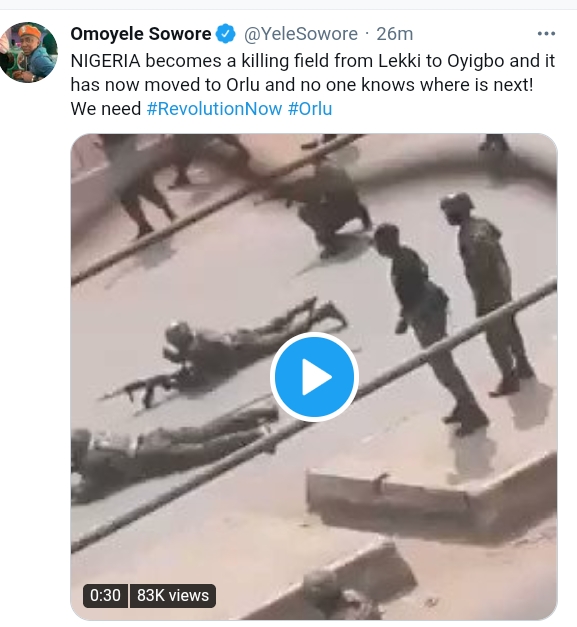 It is barely 3 months since Nigeria witnessed the gruesome murder of some innocent Nigerian youths on Lekki Toll Gate Lagos by an unidentified Nigerian Army. Today, the same thing is about to repeat in Orlu Imo State.

Omoyele Sowore, a popular Nigerian Human Rights Activist and Revolution Movement, has taken to his Twitter minutes ago to expose and condemn the ongoing killings in Orlu. In his words, he says;

“NIGERIA becomes a killing field from Lekki to Oyigbo and it has now moved to Orlu and no one knows where is next! We need #RevolutionNow #Orlu”

NIGERIA becomes a killing field from Lekki to Oyigbo and it has now moved to Orlu and no one knows where is next! We need #RevolutionNow #Orlu pic.twitter.com/WudXjCrG3g

It is indeed sad. We condemn to killings of innocent and unarmed civilians. If we don’t speak up now, it may be late tomorrow.

From the video, it appeared he was in his Jeep before he was attacked. He was seen dragged down from the jeep and shot immediately. His attackers appeared to lay ambush or were pursuing him with a vehicle.

The yet-to-be-identified man was shot at a close range at his back by the suspected gunmen before zooming off with the Jeep. According to an eye-witnessed who was said to be around the scene, the man was immediately rushed to the hospital.

However, he was confirmed dead on arrival. People who were around the crime scene photographed the victim when he fell on the ground. This is the man who was shot dead by the suspected unknown gunmen.