Have you seen this movie; “The gods must be crazy”? If yes, what fascinates most about the movie? Mine was when Xi was looking for his kids and when he finally found them. I shed tears with him. My mother wept when Xi found an ocean where he went to throw the empty coke bottle away. She asked why Xi didn’t use the empty bottle to fetch water for his people. But that was for the gods to answer. They were truly crazy in that movie. 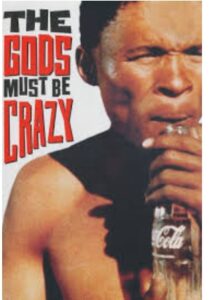 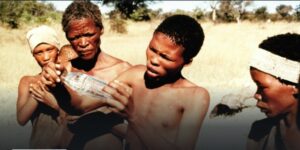 If you have seen the movie, “the gods must be crazy”, the face in these photos won’t be strange to you. He is popularly known and addressed as Xixo. It has been a long time since he was featured in a movie. Something has happened to him. In this article, I will state 10 Facts About Xixo Of “The gods Must Be Crazy” That Will Interest You and also reveal why nothing has heard about him. 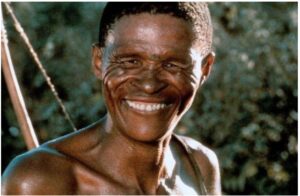 *XiXo Of “The gods must be crazy”

This empty Coke bottle began to plant seeds of discord among the once peaceful and loving bush tribesmen and women who lived and had everything in common. Xixo was determined to throw the empty Coke bottle away off the edge of the earth. On his way, the craziest scenes began to unfold.

“The gods must be crazy” remains one of the most hilarious and unforgettable movies of the 1980s. Xi, as he was always called in the movie was a Namibian bush farmer. His real name is Gcao Tekene Coma which was wrongly misspelled as N!xau ¢Toma, until 5th July 2003.

These are the 10 facts about this great author that will interest you:

But this was actually what he agreed with the film owner. The filmmaker didn’t envisage the film would hit such fortune.

He was born in a bush village called Tsumkwe in the Namibian region in Africa.

(3). Xixo was paid in cattle for his first role in the movie

The Kalahari bushman at that time didn’t know the value of money. He refused to accept money and demanded cattle equivalent to the money that was paid to him.

(5). XiXo featured in three more movies after “the gods must be crazy”.

Apart from the movie, “The gods must be crazy I & II”, Xi had featured in 3 other action films. “Crazy Hong Kong” was one of the action films he starred in.

Before this time, Xi had made money for him and his family. He retired to his native Namibian home where he reared his cattle and cultivate grains.

(8). He built pipe born water for his San tribesmen.

Water was the most sought after commodity for Xi and his people. Before he agreed to feature in “the gods must be crazy II”, he had learned the value of the dollar. So, he insisted the film owner build him a brick house with running tap water in it.

(9). Xixo owned a car but he never learned to drive it.

We have lost the favorite actor in “the gods must be crazy”. No one knew the cause of his death. He was found dead in the bush where he went to fetch woods. Before his death, it was reported that he suffered from Tuberculosis.