It is a mourning period for the Church of Nigeria Anglican Communion as the news of the death of the Bishop of Lagos Diocese and Archbishop of Lagos Province, Most Revd. Olumakaye. You may see also the 2022 CON Anglican Bible Study Outline (September to December).

The news of his sudden death is coming just few weeks after the death of 2 Bishops in the Anglican Communion. The Bishop of the Diocese of Akoko Edo, Rt. Rev. Jolly Oyekpen, died on August 29. Another, Rt. Rev. David Obiosa of the Diocese of Ndokwa, passed away a few weeks ago. Both died in the active service. Most Revd (Dr) Humphrey Bamisebi Olumakaiye (Archbishop of Lagos Province) is Dead. See How to Register for DIVCCON at Home – Divine Common Wealth Conference Registration.
The news of his death leaked into the internet in the early hour of today.  “The Bishop of the See of Lagos and the Archbishop of the Lagos Ecclesiastical Province, His Grace, The Most Revd (Dr) Humphrey Bamisebi Olumakaiye has gone to join the Saints Triumphant!
May The Good Lord console and be with the Diocese and Province of Lagos and The Church of Nigeria in general!
May The soul of His Grace rest in perfect peace!” wrote a Facebook user.
“This morning, we lost to the cold hands of death, the Archbishop of Lagos Province, Most Revd. Olumakaye. May his soul RIPP.” another twitted. 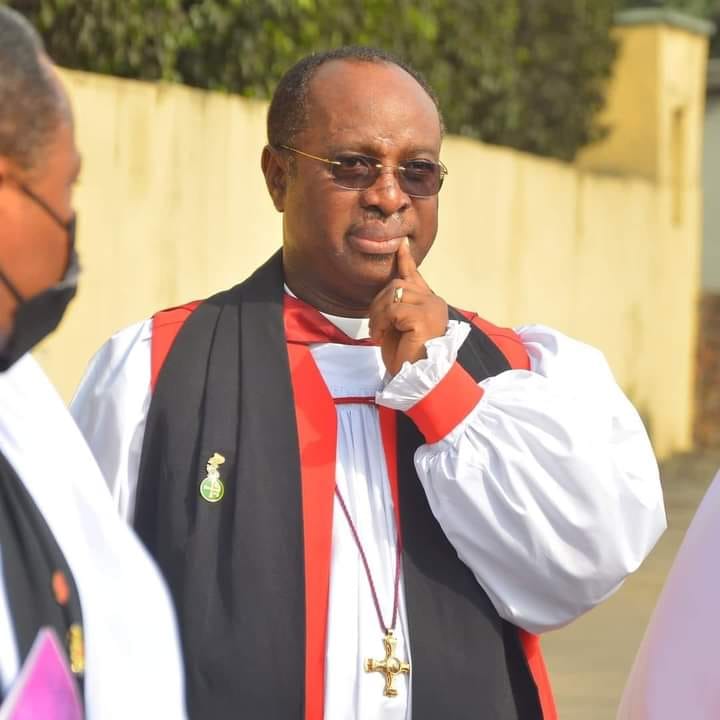 His death has been confirmed by the Lagos Diocese in a memo which was signed by the Synod Secretary Ven. Segun Ladeinde and the Diocesan Chancellor, The Hon. Justice Adedayo Oyebanji. He on Sunday evening, on the 30th October, 2022.

The memo which was captioned; “News release on the transition of the most revd Humphrey Bamisebi Olumakaiye, Ph.D, FICT Diocesan Bishop of Lagos and Archbishop of Lagos Province”, read in parts:
‘With heavy hearts, but in the sure hope of Resurrection, the Diocesan Board of the Diocese of Lagos, announces the sudden transition of the Bishop of the DIOCESE OF LAGOS and ARCHBISHOP of the ECCLESIATICAL PROVINCE OF LAGOS, His Grace, the Most Revd Dr. Humphrey Bamisebi Olumakaiye, Ph.D, FICT who was called up to higher service in the evening of Sunday, 30th October, 2022 at the age of 53 years.
The Most Revd Humphrey Bamisebi Olumakaiye, Ph.D, FICT was enthroned as the Bishop of Lagos on the 30th July, 2018 and shortly after in November, 2021, he was presented as the Archbishop of the Ecclesiastical Province of Lagos.
His Episcopal Sojourn in the Diocese of Lagos and subsequently at the Province was characterized by the phenominal, physical and spiritual developments for which all of us shall remain very proud. We shall keep you posted, as the detailed arrangements of the funeral obsequies unfold and made public’. 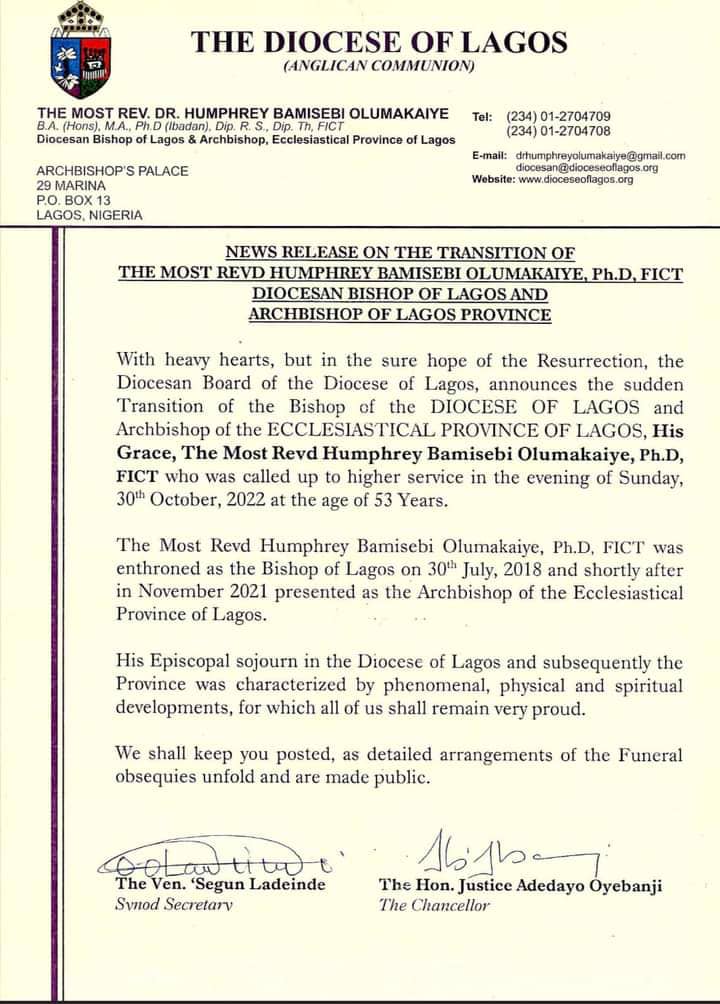 Is Bishop of Lagos Diocese dead?

Yes. Most Revd Dr. H. Bamisebi Olumakaiye died on Sunday, 30th October, 2022. The cause of his death is yet to be known. According to close sources, he died after a brief illness.

Bishop H. B. Olumakaiye of Cathedral Church of Christ, Marina, Lagos passed-on the early morning of October 31, 2022. He was born in 1969 and aged 53 at time of death.

Who is the Wife of Bishop Bamisebi Olumakaiye?

The late Archbishop Bamisebi Olumakaiye is married to Prof. Mrs. Motunrayo Funke Olumakaiye. He is survived by his wife and children.