The former Pastor who worked under Apostle Suleman has been on a words battle with his embattle boss overheating accusation of having canal knowledge of his wife who is also a senior Pastor in the same Church. Pastor Mike Davids, recently has threatened to released video evidence against Apostle Suleman.

-Davids released an audio clip which he claimed was a conversation between him and Apostle Suleman, the general overseer of Omega Fire Ministries

Mike Davids, the ex-Pastor with Omega Fire Ministry (OFM) who accused Apostle Suleiman, the general Overseer of OFM of sleeping with his wife Pastor (Mrs.) Faith Edeko, has evidence has finally released audio clip evidence against him.

Biden Will be Disgraced and Impeached — Apostle Johnson Suleman

On the other end of what appeared like a telephone conversation, a voice was heard threatening Mike Davids. The voice at the other said he would make him disappear on the earth. Davids claimed the voice belonged to Apostle Suleiman. 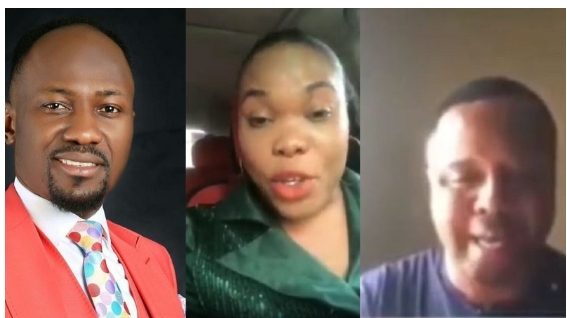 His marriage to his wife was said to hit the rock some years ago and both have walked their separate ways. It is a surprise to the church why Davids bounced back suddenly to accused the general Overseer of being responsible for his marital woes.

In reaction to the accusation and the court suit, Apostle Suleiman has filed a 5 billion naira suit against his ex-Pastore for defamation and damages to his reputation. The matter has been reported to the IG of Police who has made a move to arrest Pastor Davids.

It was on the hit that Davids released an audio clip that has been threatening Apostle Suleiman with. He claimed the voice at the other end belongs to Suleiman.

These are voice Conversations that took place in the audio clip:

“I avoided you because of the way you talk but it is clear to me that you are possessed with a demon. The same thing that made me avoid you, you keep repeating them. You will die prematurely. God will punish you. Whatever you are looking for in this life, you will not get it.

“When I noticed it because I am very temperamental; my temper is not good. That is why I am telling you tonight. I will make you disappear.”

This too shall pass. The church must match forward.

Please, comment your view in the box. Argue with your brain, not with your skull.