Li Fengping – Nurse Sentenced for Killing and Cooking her Boyfriend

Li Fengping – Nurse Sentenced for Killing and Cooking her Boyfriend in the pot. This story is one of the reasons why God said that the heart of men is wicked. Who knows? Looking at this beautiful damsel on the face, you would doubt she would hurt a fly. But beneath that beautiful face is a wicked heart.

Her name is Li Fengping. She is a nurse who worked in the emergency unit. She has been sentenced to death For killing his boyfriend who was a medical doctor. She killed him and cooked his meat in the pot. (You can support my blog by clicking reading the “read original”.

According to the local reports in China, “25-year-old emergency nurse Li Fengping, who is a friend with Luo Yuanjiang, deputy director of the orthopedics department of her hospital was found out to have been engaging themselves in sexually related friendship.” 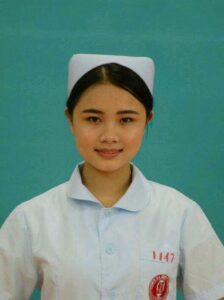 The reports further said that Fengping seriously owed her colleagues due to gambling addiction, and she was reportedly forced to pay off her debts with sex “sometimes three times a week”.

Nurse Li Fengping killed her colleague and cooked the remaining doctor’s body part of the remains in the backyard of Yulin People’s Hospital of Yulin City People’s Hospital in Guangxi Zhuang Autonomous Region, southern China. She said she did it in retaliation for alleged sexual extortion by the doctor.

During an investigation, the police found out she flushed down the mutilated and cooked body through the toilet. According to the National Sohu report, Li is now sentenced to death for intentional homicide. It has been reported too that she had been ordered to compensate the man’s family with £11,349.

Now, where will she get the money? It was her habit of gambling that plunged her into huge debt which she was trying to settle in an immoral way and now another bigger debt.

For me, she deserved what she got. She deserves no mercy because she went to the extreme. What is our own opinion? Check more interesting stories from us. How can you see it? Click on read original at the top.

One thought on “Wicked Heart. Nurse Killed Her Medical Doctor Boyfriend and Cooked His Meat”