Omoyele sheds Garba Shehu over the abduction of Kankara schoolboys 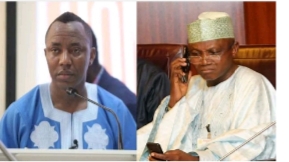 The presidential spokesperson, Garba Shehu has faced a backlash from popular human rights activist and former presidential candidate, Omoyele Sowore over the misinformation he made over the abduction of Kankara schoolboys.

A few days ago, the media went berserk as the report of the abduction of Kankara schoolboys in Kastina State was publicized. This incident happened while the president of the Federal Republic of Nigeria was also in his home state, Daura which is also in Kastina State.

Further rage sparked on social media as it is reported that the President sent an entourage to console the family of the victims despite being in the same state.

See the African Tribe where the more “Ogo” you have (Elongated head), the more Intelligent you’re Regarded

After the 344 schoolboys were released by the bandits in Zamfara State, Garba Shehu had tendered an apology to the citizens and claimed that he was misled by those who should have known better about the occurrence.

This however sparked the anger of the former “revolution now” activist, Sowore who reacted to this as he claimed that Shehu’s case is beyond apologies.

He further described him as “an apology of a person” and added that he “lies to cover lies and now so obsessed with lying so much that he does so effortlessly and without shame”.

He wrote; “Your case is beyond apologies, you’ve become an apology of a person! It is too late for you! You lie to cover lies and you are so obsessed with lying so much that you now do so effortlessly and without shame!”

Meanwhile, Garba Shehu is yet to respond to this negative comment from the popular media spokesperson as at the time of reporting this. But in my opinion, Sowore was right for making such a statement because the misinformation is a wrecking mistake to be made by a very reputable presidential spokesperson whom everyone must have thought is a reliable source. It is obvious too the public is supporting his stand on this issue.