Wonders shall never cease to occur. This is actually what I said the moment I saw the viral video of these 3 young men bathing on the graveyards of the dead for money. 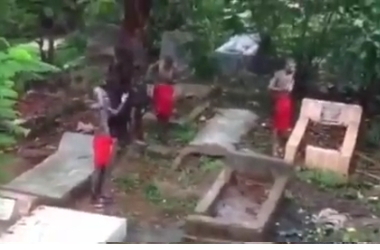 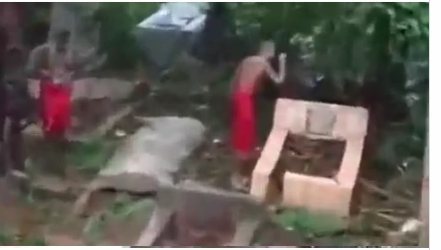 This disturbing video was shared by Linda Ikeji’s Instagram page. It is a pity the route our young men have chosen to tour.

On her Instagram post, LindaIkeji captioned the video this way; “Shocking video of 3 suspected Yahoo boys bathing at Cemetry”. It was reported here that the footage was captured from an uncompleted building by a stunned individual.

Nowadays, youths can do anything for money. No wonder the Bible says that the love of money is the root of all evil.

Some have sold their souls to the devil for the love of money. The story and news of yahoo plus are in increase these days.

In this post, I will show you the video of 3 boys who are suspected to be Yahoo boys. The viral video captured 3 young boys who were in the burial ground, on dead peoples’ graves, and taking their births.

While they were taken their baths, they did it in a hurry. They didn’t know they were being photographed by someone who lived nearby.

From the video, we could also see one of them talking to the grave as he bathes. He appeared to be making incantation as he bathes.

One amazing aspect is how they didn’t bathe out the soap and foams on their body. They just scrub with soap and a sponge and ran. The trio jumped through the fence of the Cemetry and disappeared.

Did they leave their soaps and sponges behind? Exactly what I am suspecting. Watch the Video and confirm.

We are not informed where the video emanated from. But many people who saw the believe that the young men are no other than internet fraudsters aka Yahoo boys.

The fetish practice is to prepare them on how to scam or defraud their victims.