About Maria BBNaija 2021 Biography and Net worth

Maria BBnaija 2021 full name is Maria Chike Agueze. She is a half-caste of an Igbo origin – Imo State to be precise. One thing people will always remember about Maria is that she came into BBNaija season 6 as a wild card. Here is Maria BBNaija 2021 Biography and Net worth.

ATTENTION! YOU MAY ALSO READ:

Dare Adekoya – Behold the Face Behind BBN Season 6 Sponsor, His Biography, Net worth.

One of the female housemates in this ongoing sixth edition of the Big Brother reality show is MARIA. No one will have thought of her to be a wildcard, as it was revealed during the first week of the premiere of the show. It can be concluded that she played her role perfectly, as a wildcard. Perhaps, she might be fit for a secret agent role in the future.

Maria, who is one of the first 22 housemates at the beginning of the contest, earned her spot to vie for the 90 Million Naira grand prize, along with Pere, since no one could decipher them as wildcards. At the opening night ceremony, she labeled herself as a loving and kind-hearted lady.

You would remember how she promised to add a bit of spice to the show, by making most male housemates fall in love with her. Since the show commenced, she has been staying firm to her first-day promise by triggering one form of controversy or the other inside the Big Brother house.

In this article, we feature a deep insight into the life of your favorite housemate, Maria BBNaija’s biography, her net worth, education, and career. At the end of this post, you will get to know more about Maria – your BBNaija fantasy housemate.

In the year 1992, Maria whose full name is Maria Chike Agueze was born to an interracial couple that features a Nigerian father and a white mother.

Although she is of bi-racial (popularly known as half-caste) descent she claims to be a full-fledged Nigerian by nationality. Maria’s father is said to be a native of Imo State. Therefore, she is a mix of Igbo and white origin.

Maria spent a great childhood with a colossal experience traveling different nations and continents. She perceives herself as someone that loves adventure, and a fellow who doesn’t fancy dull moments.

As an adult, Maria spent a large chunk of her adulthood in the United Kingdom. Due to this fact, she was said to have undergone both high school and college schooling inside the borders of the UK.

She bagged her high school credentials from Trinity High School inside MANCAT College. Later on, she proceeded to study at City College in Manchester, where she enrolled for a course in the Performing Arts. Not ending there, she still forged ahead to obtain a Bachelor of Arts in Communication, from the University of Salford.

Before coming to Big Brother, Maria has engaged in diverse fields of work. As stated earlier, her adulthood kicked off while she was still in the United Kingdom. Maria had worked as a front desk representative in Grosvenor Casinos. A work she did between 2006 and 2011.

She had also been engaged in administrative positions between 2006 and 2012. She became an Administrative Assistant, in 2012, at Goderough College in the UK. She was also a Human Resources (HR) assistant in KBC Financial Services Inc.

Furthermore, she was a personal assistant to the CEO of Deloitte in the UK, at one point. At some other point, she was engaged to Emirates Airline as an air hostess. Later on, she exited the airline firm to chase a career in Real Estate. Just recently before coming to the BBNaija show, she was an estate realtor in Dubai. 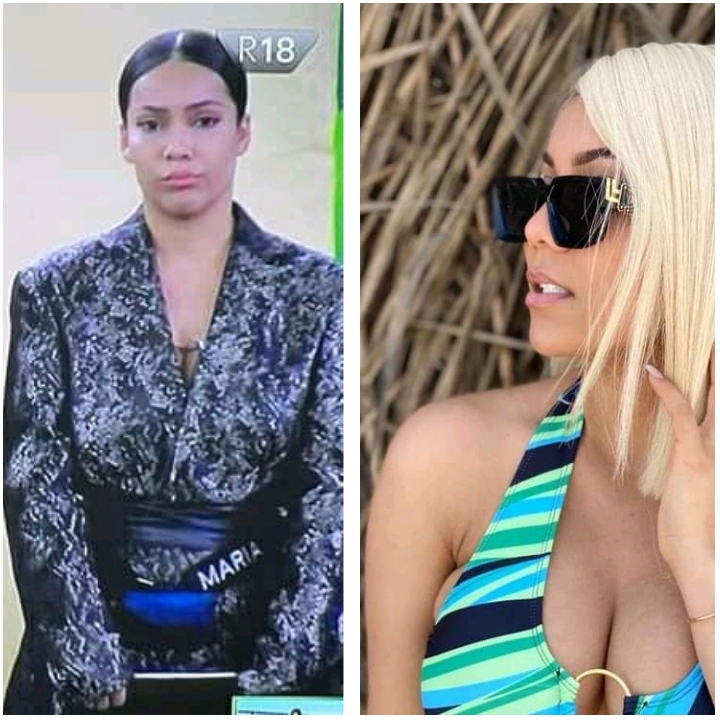 Maria claims to be a fun-loving, soft soul and a loving woman. She once opened up, during a diary session with Biggie that she used to have an aggressive character but has learned to be gentler around people.

She perceives herself as a dream-chaser who would leave no stone unturned to achieve her goals. She disclosed to have a caucus of friends who call her crazy, in a loving way.

She also said that she would be involved in any physical brawl, especially for a man, during her stay in the Big Brother house.

Maria, as an adventurous person, claims to relish the thrill and excitement that accompanies the feeling of traveling. Since she once worked as an air hostess, her job provided her to privilege to tour around the planet. She has been to all continents on earth except Antarctica.

She has a personality that loves to mind her business whenever a conflict comes up in the house. She likes to gulp some red wine to relax her nerves on any moody day.

According to the female housemate, she won’t readily get along with the crazy and ‘over Sabi’ kind of people.

Maria declared her relationship status to be single. According to her, she wasn’t dating any guy before her entry into Big Brother’s house. However, the BBN house is renowned for its love twists, ships, and so on; it won’t be any surprise to the viewers if she eventually gets herself into one love ship inside the house.

How Much is Maria BBNaija Net Worth?

Maria is estimated to have a net worth of $20,000 her stint career in the administration and air hosting fields. Aside from Big Brother, she has a current career, budding in Real Estate in Dubai.

How old is Maria BBN? Maria told us she was born in 1992 which means she is 29 years. However, a troll who knew her from childhood claims Maria is above the age.

According to her, Maria BBNaija should be around 34 or 35 years judging from the years they left secondary school in Nigeria. What do we know kwanu???

Maria BBNaija is a typical example of an all-rounder when it comes to hustling. She knows where and how to get you a house in Dubai. She is also your hostess.

Before she came into Big Brother, Maria had worked as a front desk representative in Grosvenor Casinos. A work she did between 2006 and 2011.

She had also been engaged in administrative positions between 2006 and 2012. She became an Administrative Assistant, in 2012, at Goderough College in the UK. She was also a Human Resources (HR) assistant in KBC Financial Services Inc.

Furthermore, she was a personal assistant to the CEO of Deloitte in the UK, at one point. At some other point, she was engaged to Emirates Airline as an air hostess.

Later on, she exited the airline firm to chase a career in Real Estate. Just recently before coming to the BBNaija show, she was an estate realtor in Dubai.

Yes. Maria BBNaija is an Igbo girl from Imo State. People who knew about her childhood claimed she attended the same secondary school together with them in Nigeria.