WILD CARDS OR WILDCARDS in BBN 2021 – the Meaning

Wild cards, Wildcards, or Wild-cards simply means someone who is allowed to take part in a competition, even though they have not achieved it in the usual way. The term stands for ‘fake housemates‘ in the BBNaija 2021 show. As in, they are not among the selected competitors yet they are there to compete.  It is a new term introduced by Big Brother in BBN 2021. WILD CARDS OR WILDCARDS in BBN 2021 – the Meaning. 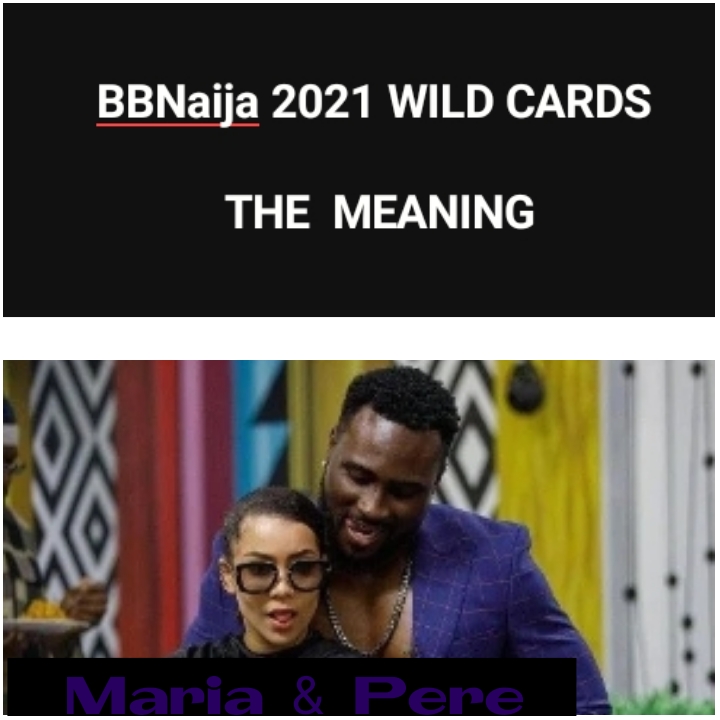 The Big Brother Naija 2021  has just begun yet the suspense it leaves on people has become intensified especially as Big Brother announced that there are wild cards planted in the midst of the housemates. The rest of the housemates are tasked with the duty of finding out who the wildcards are and getting them evicted from the show.

Last night was tensed in the Big Brother’s house and the housemates began to mention names of the suspected wild cards among them. In this post, we want to look into the meaning of wild cards as it is used in BBNaija 2021 and its meaning generally.

What is the Correct way to Write Wild cards?

WILD CARDS OR WILDCARDS in BBN 2021 – The Meaning 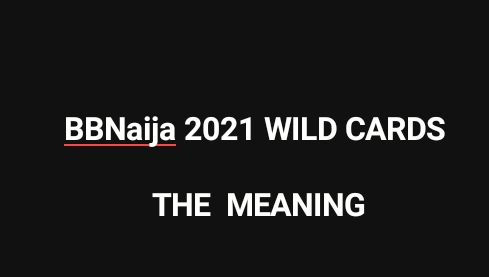 According to Wikipedia; the word wildcard can be variously spelled as wildcard or wild-card. So, whichever way you spell it, you are correct. In Big Brother Naija 2021, wild cards are defined as the fake housemates planted among the housemates who stand the chance to be evicted if discovered by the rest of the housemates.

Therefore, in this contest, BBN 2021 wild cards or wildcards means the fake housemates in the house. That is to say that they are imposters in the house planted among the selected housemates. This group of housemates did not go through the normal processes others went through before being selected to participate.

In another definition by MBN;  “the word may refer to an opportunity to enter a sports tournament or competition without having to go through the qualifying rounds or to have reached a specific ranking level.

Sometimes a person or something may be referred to as a wildcard when we do not know how they will behave in a particular situation. When describing people, the term ‘wildcard’ has a similar meaning to ‘loose cannon’. The person is considered as generally unpredictable, often reckless, whose wacky behavior may either hurt or benefit the event, group, or whatever depending on the situation”.

Biggie, the organizer of the Big brother Naija added Big Brother wild cards in BBN season 6. These wildcards are the fake housemates planted among the real housemates.

These wild cards in BBN 2021 have been named last night by Obi Uchendu, leaving the real housemates wowed. They are Maria and Pere and they stand the chance to participate in the end since all the housemates didn’t know they were the ones. They may also be evicted in the future but not as wild cards anymore.

What happens if the Real Wild Cards are Not Fished out?

BBNaija 2021 housemates Maria and Pere are the wildcards in BBN 2021. These two were announced last night by the organizers of the BBNaija show since the housemates were not able to fish out who they were by themselves. This has automatically qualified the two Wildcards to continue in the game with the rest of the housemates having escaped the first eviction.

WILD CARDS OR WILDCARDS in BBN 2021 – the Meaning (Summary)

We have been able to define the true meaning of Wild cards in its general context. We have also given its meaning as it is being used in the BBN 2021 context. Also, in the body of the article, we stated the various ways to spell the term.

It means fake and unpredictable housemates who are planted among the real housemates to compete with them. The wild cards were planted in the house by the organizers of BBN season 6 and task other housemates to fish them out.

Failure to do that will mean the wildcards will remain in the game and continue the competition with them. Fortunately and unfortunately they have been named last night by the organizers and the wild cards are Pere and Maria – they will stay put.

Wild cards, Wildcards, or Wild-cards; whichever way you spell and write it, you are correct. It is the plural form of ‘wildcard or wild card’. It is also a noun. You can actually make a sentence with it this way; the Wildcard is coming for dinner.