— See the Compilations of T. B Joshua’s Burial photos

Read 3 Powerful Quotes Culled from Tributes written in the Honour of Prophet T. B. Joshua.

He speaks on the life and the death of Prophet T. B. Joshua. “If Prophet T.B Joshua was ‘evil’ and he healed the sick, fed the poor… then I like his kind of ‘evil’.” He made the speech in the form of Tribute to the fiery general who was laid to rest yesterday at the Synagogue Church of All Nation amidst tears. Pastor Paul Enenche Tribute/ Speech for T B Joshua.

Pastor Enenche made his bold declaration about the T. B. Joshua at the heat of the criticism by concerned Nigerians on the ‘unChrist’ attitudes of fellow General Overseers in Nigeria who were visibly absent from the burial service of Prophet T. B. Joshua.

However, Enenche has demonstrated his brotherly love towards the deceased fellow GO, T. B. Joshua. Pastor Paul Enenche has this to say on the Man of God Prophet TB JOSHUA”. 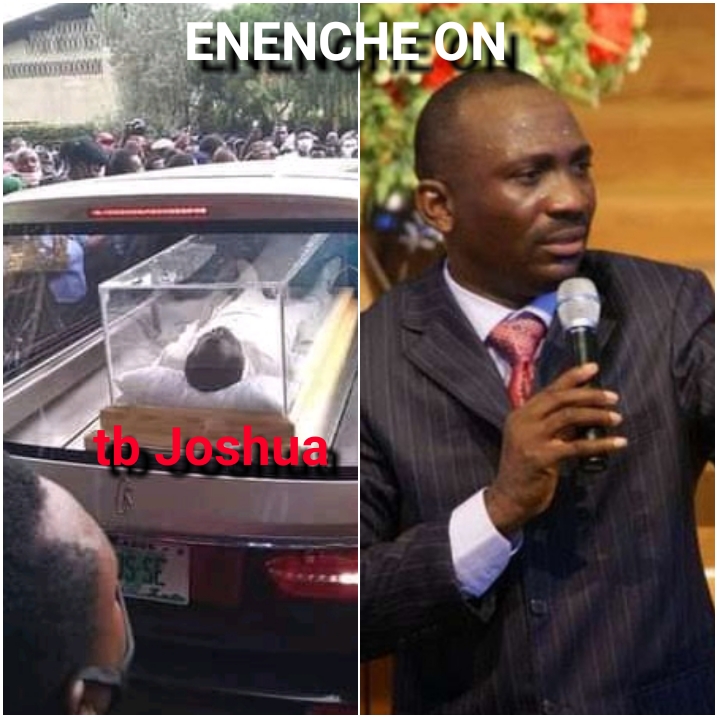 “WHILE WE BURY HIM… HIS DEATH OPENED MY EYES.

As we bury T.B Joshua today, we must not bury some of the Christ-like virtues that made him outstanding.

I kept thinking throughout the night – was this how Jesus came, performed miracles, fed the poor, healed the sick and did other good works, but the people despised, hated and killed him? I am not equating any man to Jesus, but T.B Joshua demonstrated more Christ-like virtues than many “God’s Chief Registrars, Chiefs of Staff to Jesus, Assistant God, Deputy God” parading our pulpits today.

They told us how ‘evil’ he was, but were silent on his matrimonial success. He had just one wife and they were married for 31 years… This is Christ-like.

They told us how ‘evil’ he was, but were silent when he fed the poor, built hospitals and schools, responded to humanitarian needs on our streets… This is Christ-like.

They told us how ‘evil’ he was, but kept mute on his humility to board the same coastal bus with his team to go for outreaches. This is Christ-like because even Jesus Christ boarded the same boat with his disciples.

They told us how ‘evil’ he was but kept silent when he brought peace to South Sudan. He was a peacemaker. “Blessed are the Peacemakers…”. This is Chris-like.

Not until his death did I know his wife and even children because he never projected his family. His life and preachings projected Christ more than anything else.

If Prophet T.B Joshua was ‘evil’ and he healed the sick, fed the poor, built hospitals, schools, and houses for the needy, brought peace to nations of the earth, then I like his kind of ‘evil.’

Enenche wrote his tribute public yesterday via his social media handle. , 9th July 2021. His words have attracted so many reactions from the public and got so much talking.

“It is strange that those who always say we should not speak ill against a Man of God are the ones doing ill against one of their own because of different opinions.

God will surely judge on the last day”. — YOuthvolution.

Prophet T. B. Joshua was born in 1963 and died in 2021. He is survived by his wife whom he has been married to for the past 31 years and his daughters.

He was buried at the synagogue church of All Nation yesterday, 9 July 2021 amidst tears. He was a man who built instated mansions. He is barely gone but the world is already missing him.