One thing you should know about this Igbo slang is that so many people used it wrongly. This is because they did not understand the true meaning of it.

I may not be able to say here who exactly originated “ihe nkea owu rice” slang. But it came from a celebrity. It was a post he made on social media.

It was a post he made about a plate of rice, green rice. The green color was used to cook the rice that when you see it, you will actually ask if the rice was for the eating.

“Ihe nkea owu rice” was the caption he used in showing people the mystery green rice served on a plate. 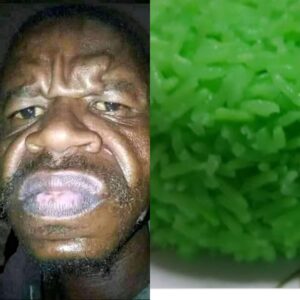 “Ihe nkea owu rice” Igbo slang is a question. It is used to show disappointment, disapproval, or surprise about something. The originator was disappointed when he saw the much-talk-about green rice and was moved to ask his friends; “ihe nkea owu rice”. Is this truly rice?

This Igbo slang was spoken in Aba or Owerri mother tongue. On a normal Igbo dialect, it would have been; “Ihe nke a o bu rice?” Onitsha people will simply ask; “ife nkea oo rice?”

As time went on, people began to use it to show their disapproval or disappointment at people or entities. Like when they want to criticize a particular government policy, at the end they will add, Nigeria, “ihe nkea owu rice”.

People also used the slang to mean eating a favorite meal. Since rice is a popular meal eaten by everyone. When someone did evil, he will be asked; “ihe nkea owu rice”?

When people want to criticize excessive behavior, they will attach this slang. Asking the person; “ihe nkea owu rice”. In this sense, the slang is used in a different meaning.

Someone who cheats ‘often’ on his or her partner will be asked if sleeping around is eating rice. Or, someone who beats his wife, he will be asked; “ihe nkea owu rice”.

However, people do not follow the true meaning when they want to make a comment with it. The majority of people use ‘ihe nkea owu rice” slang the way it appeals to them

See other Popular slogan and their Meanings