Photos of Teenagers who got Wedded that got people Talking

See photos of Nigerian teenagers who git married over the weekend that has set the internet on fire. Photos of Teenagers who got Wedded that got people Talking.

See Photos of Teenagers who got Wedded that got people Talking 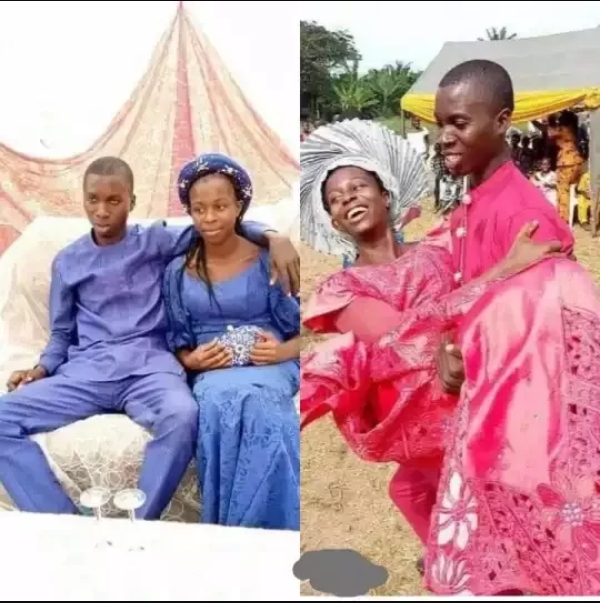 Reactions are trailing photos and videos of Nigerian Teenagers who got weeded over the weekend.  The wedding pictures were posted online by someone who attended the traditional marriage ceremony.

We all know, it’s always a thing of joy for parents when they see their children go down the aisle. Aside from that, it’s also considered a memorable day for couples.

Some photos have been trending on social media since yesterday after two teenagers tied the knot. The traditional wedding photos were shared by a Facebook user known as Emmy Ezeaphoju Egbeigwe Nnobi.

Although he did not disclose their names and location. But from the style of marriage, we believe they are Nigerians

The Couple should be around 18 and 17 years thereabout. Below are a few pictures of the young couple smiling on their traditional wedding day.

Immediately the photos were shared, reactions from users began to troll. Some Facebook users have different views about this young teenage marriage.

There were love, anger, and wow emoji reactions. Some people went to the comments section to say different things about the young couples and wished them well in their marriage.

Some people said they have no experience concerning marriage that marriage isn’t a child’s play. Below are people’s reactions towards the teenagers’ wedding ceremony.

Teenage Marriage in our Modern-day Society

Majorly is lack of male children in a family. For example, if a family has only a male child as the only survivor in that family, the family will make a plan to get a wife for him so that they will begin procreation.

But coming to our modern-day society, do you think the act is still necessary, owing to the fact that adoption is open to all? You can drop your comments in the provided space below the page.

Note: If you’re not following the 9jainformed.com news update, you’ll be missing a lot. Daily, we are dropping beautiful and phenomenal happenings around the world. Check out our news categories, we have something for everyone.