A video currently circulating on social media captures the moment an errant driver knocked a police officer off a bridge while trying to evade an arrest in Lagos. 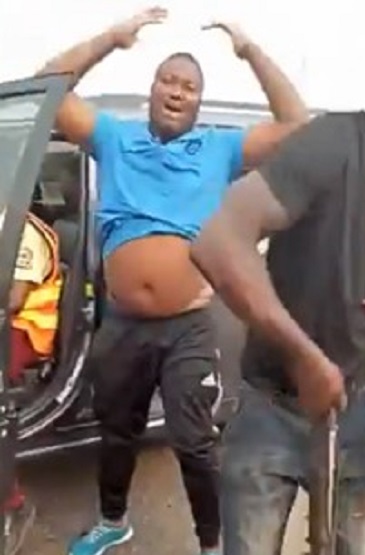 The unidentified driver was said to disobey traffic rules. When the Police Officers on duty saw him they tried to arrest him with the help of the Lagos State Traffic Management (LASMA). But the driver played a fast one on them.

He didn’t want to be nabbed for violating traffic rules. So he took a reverse.

In a bid to evade arrest, the man driving a Toyota Highlander reversed and hit one of the police officers behind, throwing him off the bridge into a canal below.

Be careful for nothing.
There things you don't with by gragra (sharp guy) https://t.co/WbMQFF8Qhx

Fortunately, the Officer was not injured. He survived the fall. He was seen in the video struggling to help himself. He was trying to swim out of the canal.
Thanks for reading. Please, remember to like our post. SUBSCRIBE to our notification to receive posts alert.