Forget Sango and Ogun; Forget Amadioha, have you seen the Ometere Buru Effigy at Ichida Junction? This statue is small but mighty. For those who have not thought of it, the effigy places curses on Evil Doers as they pass through the town.

But there are variations in the ways they work. To start with, you have to go Ogun or swear with iron for it to hunt you if you’re guilty. You have to go to Sango or swear with Amadioha before it will also hunt you. That is if you are guilty as charged.

With this Effify or Statue, placed in the Centre Ichida junction, one of the popular towns in the East, you don’t need to go to it to swear before it hunts you. You just need to pass there and it will start pricking your conscience.

The only group of people who will know about this molded sculpture is those who have traveled through the Ichida market. This image places a curse on every person whether the person is living in the community or he or she is a passer’s by. 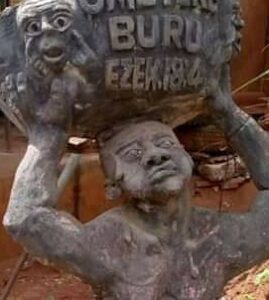 You don’t have to swear by it or have someone report you to it. As long as you set your eyes on it or set your feet on that land, any evil on your hands will turn to torment. It is known as “Ometere Buru“.  Meaning, let the evil man or woman carry his or her evil. If you translate it according to the sentence, it will mean, let the load owner carry it. The load represents all the evils one has done in his or her lifetime. 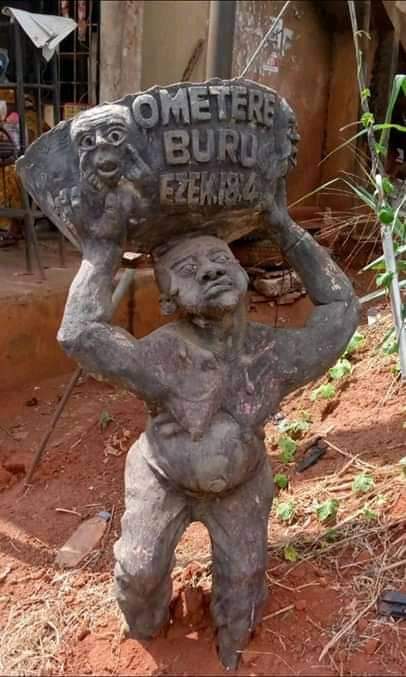 “Ometere Buru” is a preaching sculpture and at the same time a curse. The slogan is very popular. It is both used by Pagans and Christians. In fact, it was backed by a bible verse; “Isaiah 18: 4. (The soul that sins shall die).

Those who live in this town must be living in carefulness seeing this statue morning snd night. It is a reminder to live with clean hands. You will carry your own load, I will carry mine. I will not carry anyone’s loads of evil works and your children will not carry another man’s evil load.