The topic of the subject is Molecular Theory of Matter. Special Objectives: by the end of the lesson, the students should be able to:

• State the fundamental assumptions of the molecular theory
• Use the molecular model to explain pressure in a gas, cohesion and adhesion, diffusion. 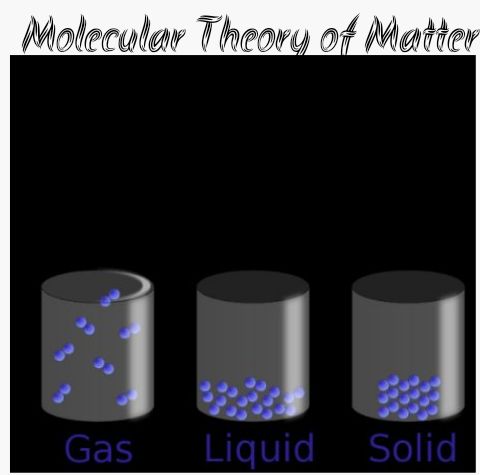 Physics is the scientific study of matter, energy, force and motion and the way they relate to one another. Everything in the universe is made up of matter. Matter is anything that has mass and can occupy space. matter is made up of molecules which are the smallest indivisible particles of a substance which can exist alone and are capable of taking part in chemical reactions.

For instance, the air that is breathed in is made up of oxygen molecules, which are millions of about 6.0× 1023 molecules. Each of these molecules is made up of two atoms oxygen. You may also read: Food Production and Storage in Biology.

THE ASSUMPTION OF MOLECULAR THEORY OF MATTER

Its been mentioned earlier that matter is anything that has mass and can occupy space. This means that matter can be found to exist in three distinct states namely:
i. Solid
ii. Liquid
iii. Gaseous state

this is a state or phase where matter has a definite shape and definite volume. The constituent molecules (particles) are closely weak.

in this phase, matter has an independent shape and indefinite volume. The force of attraction binding the molecules here is extremely weak compared to those that of solid and liquid.

THE KINETIC THEORY: the study of the motion exhibited by these states of matter (solid, liquid and gas) lead us to the kinetic theory of matter. The following assumptions are known about them:
1) The motion of the gas molecules are perfectly elastic, since they collide with themselves and the walls of the container,
2) The space between the gas molecules is so large,
3) The molecules of the gas are always in constant motion,
4) The motions of the molecules are zig zag i.e. in random motion.

The fact that matter is made up of molecules is an evidence from the phenomenon such as diffusion, Brownian motion, osmosis, surface tension, viscosity, adhesion and cohesion.
Diffusion: this has to do with the transfer of gas molecules from a region of high concentration to a region of low concentration. Grahams law of diffusion best explains diffusion. This law states that the time rate at which gases diffuses is inversely proportional to the square root of its density provided that temperature is kept constant. This is written as
T  1/d.