He was Buried in Sitting Position Inside the Coffin. See the Reason

This thought-provoking burial right was captured this week and it has since gone viral on social media. It was said to have taken place in Western Kenya by the tribe of Balunda.

Balunda tribe is known for a variety of religious beliefs and practices.  They bury their deads while still seated on the chair inside chair-made caskets or coffins.

There are certain decisions people or families have sole right to take, even the government has little right to interfere in most of them. One of these decisions is how family or the bereaved kindreds want to bury their deads.

Customized Coffins: Why Do People Bury Their Loved Ones With These Ways?

I mean the kind of funeral ceremony they wish to give to the person and how they want to lay the corpse to the ground. These decisions are mostly born out of cultural practices, beliefs, superstitions, and myths.

For instance, in Igbo culture, a dead man is put in the coffin and buried 6 feet in the ground. That is if the person did not take his or her life.

However, it is left for the bereaved family to decide the type of coffin to be used in burying the person. They also determine the spot the person will be buried.

In some cases, the diseased family goes extreme to attend to the corpse as if it still living. This is done when the death of the person is linked to something or to an enemy. It is even more pronounced when the hands of the enemies are suspected to be responsible for the person’s death.

Some families add weapons inside a dead man’s coffin during burial. This they do so that the dead man  will go after the person responsible for his or her death with that weapons.’

I remembered as a child when one of my father’s kinsmen lost a young man to a road accident. On the day of his burial, the siblings all came to his grave to drop a bunch of broomsticks.

As they dropped it, they were chanting similar words; “catch them and sweep them away from the earth”. It was also in the news last week when a familiar added a gun to a dead man’s coffin.

When asked the reason, one of the family members said, “the dead man will use the gun on his enemies who had hands in his death. At the same time, he will henceforth act as a security to the family”. He added.

He was Buried in Sitting position Inside the Coffin. See the Reason

Meanwhile, since last week, this Balunda chair-casket has been going viral on social. It is about a man who died and was buried in the coffin, sitting down.

This burial took place in Balunda town in Kenya. According to the report, the community is known for burying their corpse while sitting inside the coffin.

There is no exact reason for doing so. The tribe has been known for this kind of strange burial rights. They typically bury their dead in this manner. They built a chair casket and make the dead person sit on it.

So many people have reacted to this burial photo. A social media user said the corpse cannot rest in peace. So, they want him to ‘sit in peace’. Lol.

Another suggested the dead man was a king. So their King remained sitting, even at death. Another said it is a form of rare superstitious practice done to the dead people in that region.

See the screenshot of what people are saying about the dead man in the sitting position. 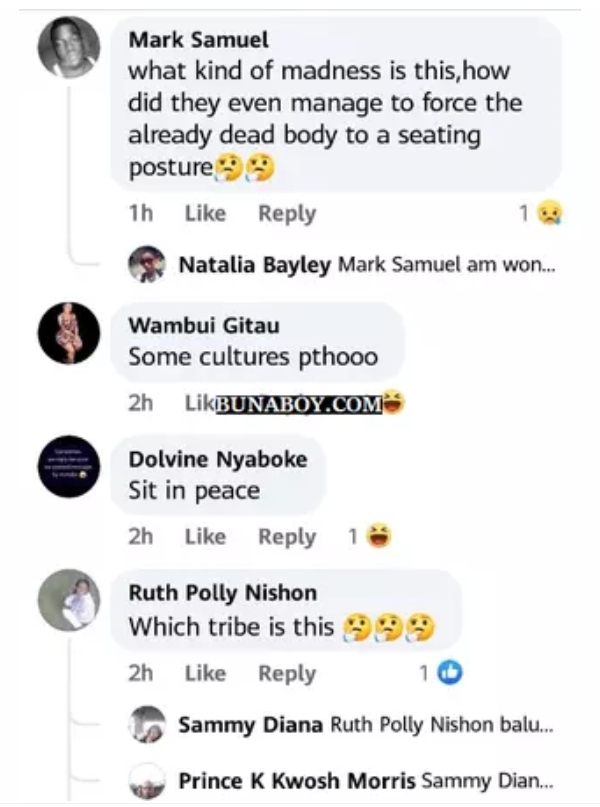 In all these talks, what baffled me most is how the people got a stiff body to sit on a chair casket. Was the dead man sitting when he died and he refused to be straightened?

So, they made the coffin based on the condition they met the corpse.  I am actually looking for an answer. You can drop your view in the comment section. SUBSCRIBE 9jainformed.com NOTIFICATION to get notified when we publish new posts.