Donald Trump; The Unsung Hero: 12 Great Things He Achieved In Less Than 4 Years In Office As American President.

In case you missed it, this is a transcript of one of Trump’s campaign speeches. After going through this manuscript again, I gave it a new caption; “Trump, the Unsung Hero”. 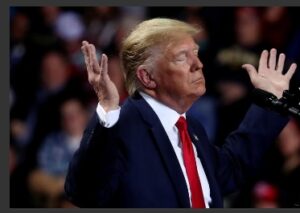 He began as usual by calling on the whole world. Of course, the anti-Trump saw everything wrong with this Transcript. I am not one of those his royal fans but I am someone with a conscience. I know when to clap for an enemy and when to frown at him. I know when to criticize Trump and when to praise him. (Do you want to see all our news updates? Click on the words written with blue at the top “Read Original”

I agree that Trump has not been that ‘good’ President for all but he has done something applaudable during his four years tenure. These are what I want to list out.

And the last but not the least, Trump administration has fought tooth and nail to see that there is an end to the deadly Coronavirus that has threatened global peace. He made a public announcement this week that the vaccine by Pfizer is 90% ready and effective.

If there is nothing Trump has done for the Americans, he will be remembered with these when he eventually leaves office.