Meet the Czech couple, Alexandra Kinova and Antonin who broke a record in 2013 by giving birth to Quintuplets. It was said that this record was heard of 480 years ago. For those who do not understand what is quintuplets, it is giving birth to five babies at the same time by a woman. 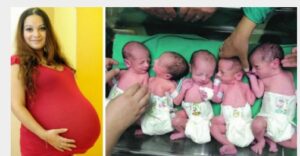 This is not actually the first quintuplets ever recorded. In fact, someone had given birth to 6, 7, and even 8. The Czech couple’s case was exceptional because other multiple births of such nature were all done through invitro. But hers was a natural conception.

(Dear reader, Please, click on the blue letter at the top “Read Original” to see all the posts you have missed).

It was said that the couple had a history of twins in their families. they were expecting multiple births but not in that alarming number.  When Alexandra conceived, there were lots of drama each time she went for her ultrasound. At first, they were told it was twins. At the second and the third visit, it was confirmed that she had four babies in the stomach. 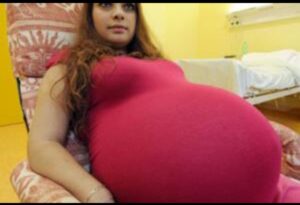 She went back ultra in her third trimester, they received another shocker. There was another head seen on the screen. The young mother broke down and wept. She was told brace up for complications and to lose the fifth baby.

To reduce her risk of complication, she was advised to terminate the fifth baby. But against all odds, the young Mom took the risk and carried them to full term.

When it was time for the babies to be brought it, they were a team of doctors, in fact, 40 of them. The babies were all successfully brought out. And of course, there were complications but Alexandra beat them all.

The quintuplets were 4 boys and one girl. The young couple already had a baby boy before the arrival of the Qqquintuplets. It is now seven years since the babies were born. See how they have grown now. 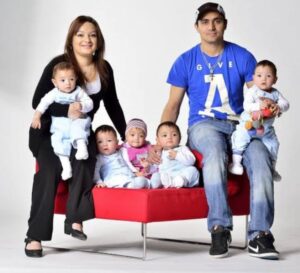 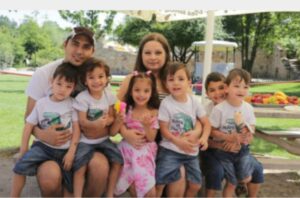 2 thoughts on “Meet the 23-Year-Old Mom Who Gave Birth To First Quintuplets In 2013. See How The Babies Have Grown”