The news of the death of the Anglican clergyman was announced in the second week of February 2021. Burial Date for Ven Julius Dike and His Wife Mrs Blessing who was Poisoned along with their Housemaid

He was said to retire to the parsonage after the church Nightvigil which was organized inside the church premises and died in his sleep.

Also, his wife, Mrs. Blessing Amarachi Dike, and their housemaid were also found dead in the morning. They were the only people in the house because their children have returned to their various schools.

Investigations carried out showed that they died of food poisoning. However, the source of the poisoning has not been verified by 9jainformed.com at the time of filing this report.

Late Ven Julius Chimaobi Paul Dike died in active service at the age of 59 while his wife died at the age of 56. Before his untimely and strange death, he was the Vicar of St Paul’s Anglican Church, Abayi Ariaria, Aba Diocese.

Ven Julius Paul Dike is a native of Umuokennunu Nnentu, Okporoenyi Autonomous Community in Aba South Local Government Area, Abia State. The date of his burial and that of his wife has been scheduled to hold on the 4th of November, 2021. Service of Songs and other arrangments are as follows:

See the Poster here for the burial Arrangement ⇓

-Pandemonium broke out in Aba on Tuesday, after Ven Julius Dike, the priest in charge of St. Paul’s Anglican Church, Faulks Road, Aba was found dead with his wife and maid at their residence inside the church compounds after having a crusade in the church premise.

-The Anglican community was yesterday thrown into mourning when one of her priests, wife, and their maid died under mysterious circumstances.

The Archdeacon of St. Paul’s Anglican Church, Ariaria, Aba, Julius Dike, and wife, Agnes were reported to have held a crusade within the church premises the previous night.

They were said to have after the crusade, ate and retired to bed together with their maid.

It was gathered that the following morning, the priest and his household could not come out to conduct morning service as usual.

According to information, at a point, some of the parishioners became apprehensive and broke into the official residence of the Archdeacon, only to find him dead with his household.

The cause of their sudden death is yet to be unraveled. Although the police are making investigations to unravel the cause of their deaths. A source attributed the death of the Archdeacon and others to food poisoning.

The children of the Archdeacon escaped were saved because they were not at home with their parents when the sad event occurred. According to the source, they would have been among the dead if they had not gone back to school.

A parishioner who spoke with Media on the condition of anonymity said neither the Archdeacon nor any member of his family complained of ill health before they retired to bed.

This is indeed a great loss to the Anglican community. May the Lord rest their souls. 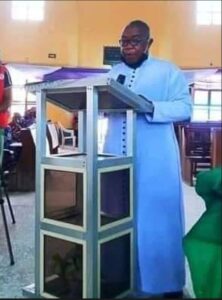 The maid living with the Priest’s family also died along with the couple.

The Power of a Praying Woman – Sermon