Meanwhile, today is Monday 23 August. No movement in Enugu town this morning. No sound of public buses. IPOB Sit-At-Home Order on 23 August 2021.

The Indigenous People of Biafra (IPOB) is planning another massive Sit-At-Home on Monday, 16 August 2021 in protest for the release of Maazi Nnamdi Kanu, the leader of the proscribed IPOB group who has been reprimanded in prison, awaiting trial. IPOB Sit-At-Home Order on 23 August 2021.

Recall that businesses and offices were hampered last week Monday, 9th August due to massive sit-at-home compliances by the IPOB members, especially in the East. Even those who were not in support were affected.

Almost every school in the East, except borders, was on closure. Teachers and students who tried to defile the order were stranded as all the public transporters were not seen at the parks and roads.

In protest for the release of Maazi Nnamdi Kanu, members of the IPOB and Biafra agitators have set aside Mondays every week to sit at home. This move is affecting both the public and the private workers in the East. There has been great solidarity since this move for Maazi Nnamdi Kanu began.

“No Going Back on Biafra. The chains on my hands are chains on the hands of ndi Igbo.” Maazi Nnamdi Kanu.

On another development, Barrister Ejiofor, the lawyer to Maazi Nnamdi Kanu paid a visit to him at the prison and had a heart chat with him. In the statement which he made public through his social media page, Ejiofor said Nnamdi Kanu’s faith is strong.

He pleaded with the members of the IPOB and Biafrans to gear up in their prayers for Maazi Kanu. He also revealed that Maazi Nnamdi Kanu is grateful for the great support and solidarity he has received so far.

In his words; he said: “We are not retreating on our struggle. There is no going back. The chains on my hands are chains on all hands of Igbos.” 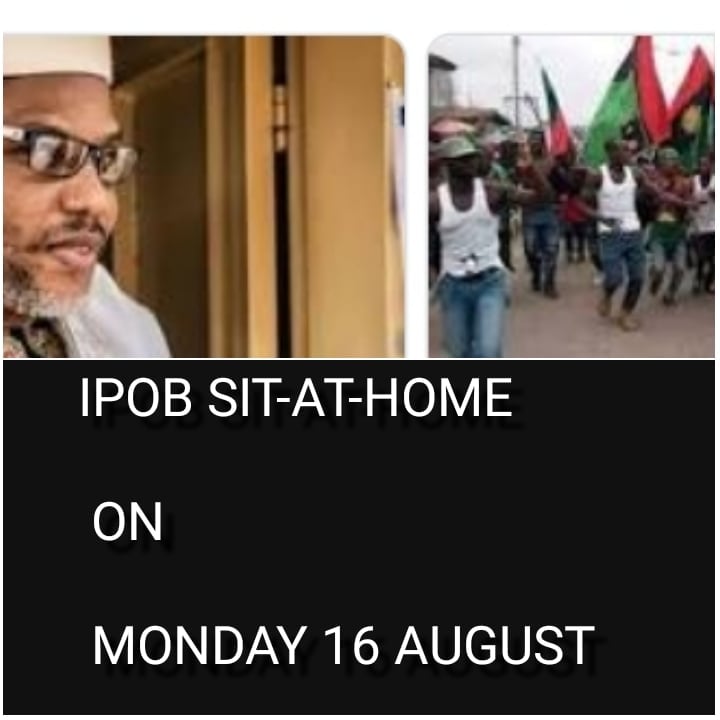 Will there be School on Monday 23 August?

This among others is the most frequently asked question about IPOB Monday Sit-At-Home order. People were asking whether there would be school last week Monday when the second Monday Sit-at-home was held.

There will be no school as long as the majority of students and teachers are relying on public transport to come to school. The transporters are the major force behind this every Monday Sit-At-Home move. On this note, the majority of the schools in the East have shifted their Monday examination to Tuesday.

I will tell you what the school management told my daughter about school on Monday. She came back and told me the government examination for Monday has been shifted to Tuesday due to sit-at-home. That is to say, they won’t go to school on Monday 23 August.

One thing I have observed about this sit-at-home is that the public transporters are the force behind it. You may decide to go to school on Monday. But I bet you, You may be stranded on the road unless you have your own personal car.

To be candid, there will be no school if there is no vehicle on the road. You just have to get ready and stay in your house and monitor how the movement is that morning before leaving the house.

Is Monday, 23 August a Public Holiday?

No. Monday 23 August is not a Public holiday. Federal and state governments are the only ones who have the right to declare any day as a public holiday.

However, Sit-At-Home order seems to affect everybody. Like last week, a Governor threatened that any worker who was absent from office on Monday will have his or her August salary forfeited. You can bear witness that the majority got ready for work that Monday but couldn’t find their way to the office.

Even some of the departmental heads were reported to be absent last week Monday. We are saying here that there is no public holiday on Monday but government workers may not be able to find means to go to their offices on the 16th of August.

There may or may not be a Sit-At-Home on 23 August 2021 by the IPOB members. Although they said they have decided and there is no going back in their struggle for the freedom of Maazi Nnamdi Kanu they are also considering the students who are writing external examinations in Igbo land.

A new order was issued yesterday in social media broadcast by IPOB representative, Chika Edoziem that Sit-At-Home will only hold on the days Maazi Nnamdi Kanu will be appearing in the court.

There is a planned sit-At-Home order on Monday 23 August by the IPOB members the decision still holds. So, there may be movement on Monday.

This new development is yet to be accepted by everyone. It is still being disputed.

Meanwhile, today is Monday 23 August. No movement in Enugu town this morning. No sound of public buses.