SOCIALISM
THE MEANING OF SOCIALISM 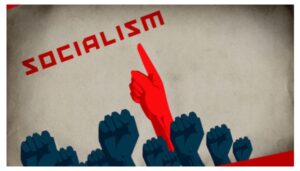 Socialism is an economic system of government in which the land, transport, the chief industries, natural resources, Eg; coal, water, power, etc should be owned and managed by the state and wealth equally distributed.
Citizens in a socialist country work collectively for the advancement of the country and the government, on the other hand, caters for every citizen.
Countries that practice this type of economic system otherwise known as the second world include; soviet union, China, Cuba, Roland, etc.
Karl Marshirir 1883 was the founder of modern socialism.

The features of socialism are;
1. State government ownership and control of all or large portions of the means of production.
2. It is democratic in nature because a greater number of the citizens participate in taking decisions on what and how to produce and who gets what, how, and why.
3. There’s an absence of economic rivalry among producers.
4. Goods and services are not produced mainly to yield profits but to satisfy the needs of the people.
5. There is equitable distribution of income not according to people’s ability to grab, but according to their contributions and needs.
6. There is a nonprice competition involving sales promotion devices such as advertising and others.
7. The private firms play little or no role in the production and distribution of goods and services.
MERITS OF SOCIALISM.
The merits are;
1. It leads to equitable distribution of resources
2. It carters for the interest of all the citizens
3. It bridges the gap between the rich and the poor
4. It creates no room for hoarding of foods.
5. It acts as a unifying factor among those who participate in economic activities in a country.
DEMERIT OF SOCIALISM
The demerits of socialism are;
1. It suppresses individual initiatives
2. It makes people lazy and unenterprising.
3. It is not self-regulating and self-functioning.
4. It does not encourage faster economic development
5. The system does not provide people with alternative choices.