Emeka Okwuosa, Owner of Oilserv, His Biography, Family, Cars, hospital and Net worth

Who is Emeka Okwuosa? He is an Anambra billionaire Engineer and business man. He is the owner and founder of Oilserve. His name is on the news today again because this month, May, 2022, he single-handedly built and inaugurated 27-beds world class hospital that will carryout open heart surgeries and kidney transplant in his village, Oraifite in Anambra State, Nigeria. In this article, we shall be discussing “who is engr Emeka Okwuosa, Emeka Okwuosa, Owner of Oilserv, His Biography, Family, Cars, Hospital and Net worth. Read also about the best hospital in Nigeria for CT scans and prices. Read about the Best Hospital for CT and MRI Scan – Memfys Diagnostic Centre, Enugu

Who is Emeka Okwuosa?

Sir Emeka Okwuosa is a philanthropist. He grew up in Oraifite and attended the Community Boys secondary School Oraifite. He was born in a family of four by a teacher. He is the third child of 4 siblings.

He owns a foundation to his name and has contributed immensely in the area of community development, health, education and poverty alleviation. He built a specialist hospital in his hometown, Oraifite where he offers free medical treatment to the indigents.

He also built the Same Irene Nneka Convent, the girls school which he named after his late mother. The school is located in Oraifite and is dedicated to the church (the diocese of Nnewi). Every year during the school annual pricegiving, sir Emeka Okwuosa awards millions of Naira to the students. This he also does to other schools in his community. The best performance students are awarded scholarships while best teachers are gifted money.

He is a graduate of Electronics and Electrical Engineering in 1982 from the University of Ile-Ife. Emeka Okwuosa is a seasoned engineer, administrator, entrepreneur, and visionary with over 36years of experience in different areas of engineering. These activities have spanned Europe (France and Scotland), North Africa (Libya), West Africa (Mauritania, Senegal, Côte D’Ivoire, Ghana), Gulf of Guinea/Central Africa (Nigeria, Benin, Cameroon, Gabon, Congo, and Angola), and Indonesia in positions ranging from Field Engineer to Technical Manager.

FRAZPOWER LIMITED: This is a Gas Development Company (Gas-To-Power).The strategic vision is to deliver at least 10 TCF of gas reserves in the next 10 years leveraging sources at varying levels of go-to-market readiness.

EKCEL FARMS LIMITED: This is an innovative industrial agricultural project, incorporating cassava and tomato farming with full industrial processing facilities. Farmland covers a total of 5,000 hectares (2,700 hectares are already allocated). The project is estimated to cost about $150m (One Hundred and Fifty Million Dollars), excluding land cost in the first phase. It will generate employment for over two thousand (2000) persons. The MOU between Anambra state Government and Ekcel Farms Limited was duly signed on 29th September, 2014 at Awka. Ekcel Farms Limited has affiliation with technical partners in Europe and Canada and has developed a blueprint that will aid massive Agricultural development, create employment and reduce poverty.

Emeka has received several awards in the course of practice of Oil and Gas EPCIC services all over the World, amongst others are;

What business does Emeka Okwuosa do? He is an oil magnet. He is into oil and gas. He owns Oilserv limited.
He is the Chairman and Group Chief Executive Officer, Oilserv Group. The Anambra billionaire businessman is a seasoned Engineer, Administrator, Entrepreneur and a Visionary leader. He founded and incorporated Oilserv Limited, in 1992 but began operation in 1995 offering world-class services such as engineering, procurement, construction, installation and commissioning (EPCIC), project management, maintenance and rehabilitation of oil and gas pipelines and facilities.

He had other positions outside Nigeria. While at Schlumberger, he oversaw some jobs in Europe, North Africa, West Africa, Gulf of Guinea/Central Africa and Indonesia, among others.

Oilserv Limited focuses on Pipeline/Facilities EPC and maintenance. It has wide ranging activities In the Niger Delta and across Nigeria. It is a major player in actualization of the Gas Masterplan in Nigeria especially for domestic gas distribution. It is ISO 9001:2015 certified and currently operates in Uganda, Kenya, Tanzania, Benin Republic and Togo.

More about Sir Emeka Okwuosa according to Oraton;  “Engr. Emeka Okwuosa is a seasoned engineer, administrator, entrepreneur and a visionary with over 33 years of experience in engineering in the following areas: maintenance and operations, teaching, wireline logging and interpretation, seismic acquisition, processing and interpretation, pipeline engineering, procurement and construction (EPC), project management, drilling and drilling services.

Emeka is the founder, Chairman and Chief Executive Officer of several companies that operate in the oil and gas industry in Africa.

He is married to Mrs Ifeoma Okwuosa. The marriage is blessed with 3 children.

What religion does Engr. Emeka Okwuosa belong? He is a Christian. He is a chore Anglican who holds a title of knighthood. He is a knight of St Christopher (KSC) of the Anglican Communion.

His mother too was conferred a Dame before her death.

Operations and surgeries have already been carried out on 20 selected patients at Emeka Okwuosa’s heart surgeries and kidney transplant hospital at Oraifite. Here are the photos of the hospital. 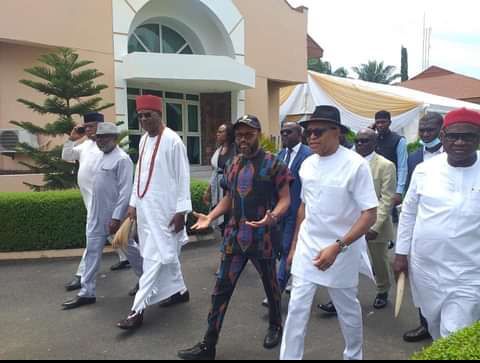 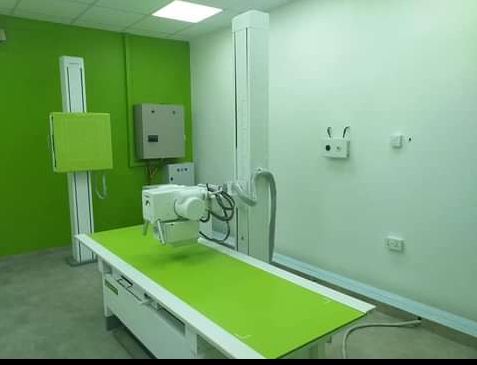 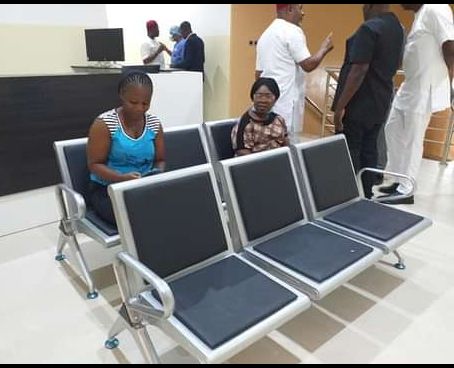 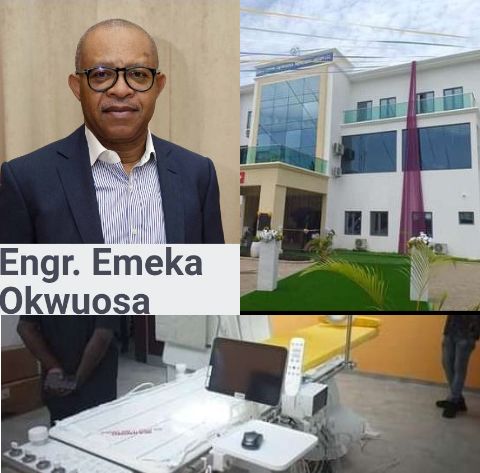 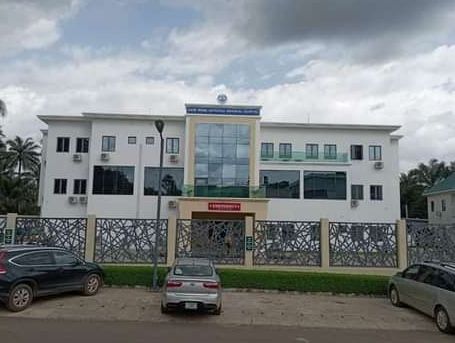 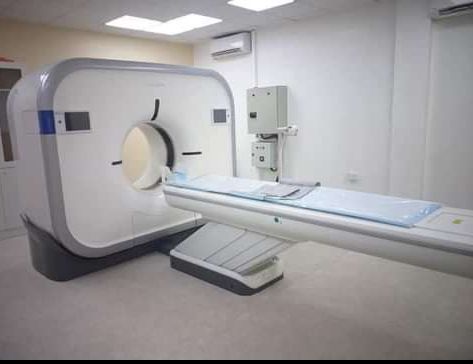 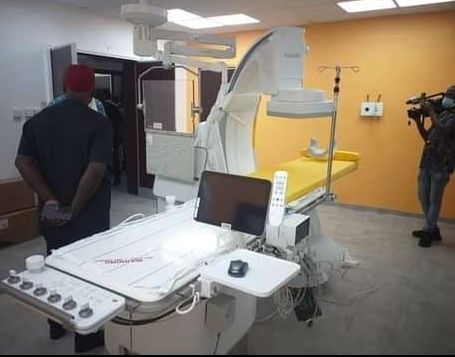 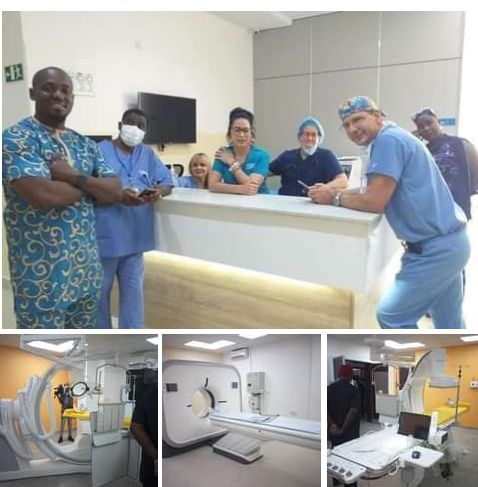 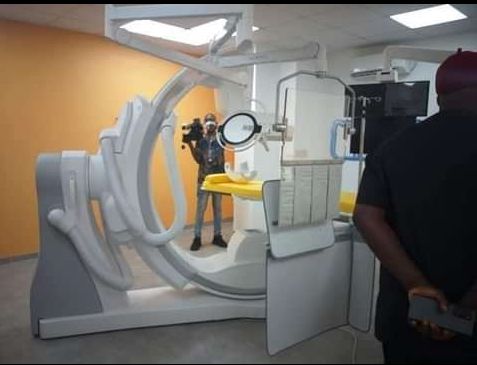 The net worth of Engr. Emeka Okwuosa is yet unknown. It is available on the internet. However, he worths billions of Naira in the asset value.

He is rated among the Anambra and Igbo billionaires.