About Theresa Onuorah (Queen Of The Coast)?

Theresa Onuorah is a household name as far as Egedege Ogene music was concerned in the 80s and the 90s. She was called the dance goddess and queen of the coast. The hit album; “Onye eee ka mu na ya ga-agba egwu o; Ogene ekwubego, mu na onye ga-agba egwu oo?… stirred morning birds from its nests in the late 80s.

Theresa Onuorah: Egedege Music And Dance goddess of the 80s

In this post, we shall be talking about Queen Theresa Onuorah, Egedege music, and the goddess of the 80s. It is been long people talked about her or her music.

What happened to Theresa Onuorah? Is Theresa Onuora dead? Where is she currently? These and others are the areas we are going to discuss.

For those who know Theresa Onuora and her Egedege dance troop, they may be wondering what happened to her. Some are also wondering if she is still alive. The name, Theresa Onuorah is familiar to many people, especially those in the South East who were born before the 80s and 90s.

She is a renowned Egedege dance and High-life music goddess who reigned in the 80s and 90s with her Egedege troops and Ogene music melody.

Queen Theresa Onuorah hails from Unubi in Nnewi South Local Government Area of Anambra State. I have met with this Egedege highly revered Queen from afar, as a child. She was always seen in those days in the burial ceremonies and celebrations done by the well-to-do individuals in society.

This is because bringing out this Queen to perform on any occasion was not a poor man’s dish. I mean, it cost fortunes in those days to have her performed in any ceremony.

Apart from the monetary and material involvement, anyone who paid her to perform in a ceremony would sign that there won’t be a downpour. It meant that rainmakers and rain drivers would be paid to be around to make sure rain didn’t beat her dancing costumes.

Edu De Coque: The Chip Off The Old Block Of The Late Oliver De Coque

Theresa Onuorah sings and dances along with her dancing troops. Her melodious voice can wake the dead from the grave.

Egedege dance was made popular by Mrs. Theresa Onuorah in Unubi Town. The name Egedege stems from local slang for richness and bravery which explains why the dance is considered cultural classics and is only played in a royal home or rich families.

She was called the Queen of the coast because it was rumored that an ordinary being cannot be endowed with such a golden voice. She has not debunked this claim. She, in fact, believes in the worship of the sea goddess. 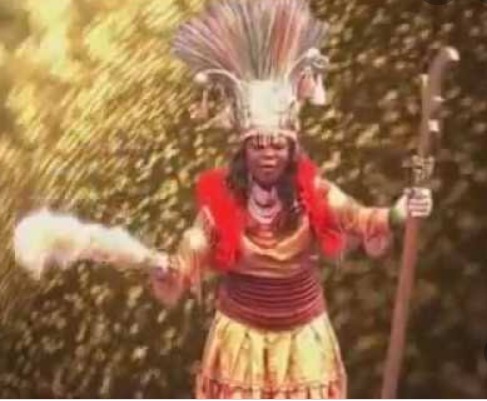 One of the myths told about Queen Theresa was that her face blurred the camera aperture. In the 90s, no one was able to successfully capture the face of this Queen with a camera while she performed on the stage. That was actually how I came to know her as a child.

My Uncle who was a cameraman fought tooth and nail to have the face of the music queen captured with his camera. Each time, she blurred the camera and blocked the view with her traditional dancing hand-fan made with bird feathers, tiny mirrors, and old shillings.

Another myth was that people were meant to believe that Queen Theresa Onuorah is not a mere mortal. It was alleged that she came from the river, the reason why she refused every man who came to ask her hands in marriage.

Her popular songs were: “Oba Egwu”, “Onwunwa mu na chimo”, “Ogene erubego, Muna onye ga-agba egwu“. She makes more use of flute and Ogene in her Egedege dance. She is a great dancer and she is a great singer.

However, Queen of the Egedege dance and high-life music is aging physically but her voice is intact. She still sings to date. She is still alive and healthy.

Where is Theresa Onuorah Now?

Theresa Onuorah is still bubbling and full of life. She may not look that elegant physically as she used to be in the late 80s and early 90s but she hasn’t lost her melodious Ogene voice.

As of early this year, she was at Enugu State to perform in a burial in one community. I heard her and I saw her. The voice never dies. “Agadi nwanyi anaghi aka nka n’egwu oma agba”, they say. (A woman does not grow old in a familiar music tone).

That was how I described her performance in Enugu. But the queen has gone down age-wise. I didn’t see the radiation in her face. It has gone with old age.

Queen Theresa Onuora has disproved all the myths told about her in time past. She is presently a mother and a wife. She is in Unubi, her hometown, living with her husband and the children.

The Ogene music goddess has raised many Ogene dance and music troops both in her hometown and abroad. To date, she still goes to perform on occasions with her troops especially in a funeral ceremony of a legend.