When we talk about Anunuebe tree, you have mentioned one of the deadliest trees in the world. It is one of the ancient trees in Africa. Anunuebe Tree – The Deadly Tree.

It is used mostly by powerful witch doctors for medicine. The question on everyone’s mouth now is; where is Anunuebe tree located? Where can one find Anunuebe tree?

Unfortunately, nothing much is heard or written about this tree. The secret about the tree lies in the closed palms of the highly secretive and primitive native medicine men in Africa. Another important fact to note about this giant and the dreadful tree is that it has no name.

Like other trees that are known with their peculiar names or with the fruits they bear. Examples: the palm tree, the mango tree, the breadfruit tree, the cherry tree, etc. Anunuebe tree has no peculiar name.

It is named and called by the havoc it wrecks on living things. “Anunuebe“, In Igbo dialect, meaning birds can’t perch. Living things don’t come closer. It is the king of all trees in Igbo land and in Yoruba land too.

According to Agu Nnewi; “Anunuebe is the most powerful and fearful tree in Igbo land. It is a natural oracle. No human gets close to the tree, not even a native doctor. Unless the spirit residing in that tree left for a mission. That’s the only time one can, hence the name Anunuebe”.

Anunuebe tree is a mysterious tree. It is not only found in Igbo land, it can also be found in Yoruba land.

“Iginla” tree in Yoruba. It’s also called Asorin in the Yoruba language. A  Yoruba writer once testified about this tree when he said he had seen his father went to the tree to get the bark. He said he still a little boy on his mother’s back. His father asked his mother to wait for him in a very far spot while he approached the tree.

he said his father was a string witch doctor. he confessed that his father was always going to the tree with a live cock. Before approaching the tree, he threw the life cock to the tree. he said he didn’t know what happens to the cock but the cry of the cock would no longer be heard the money it was thrown to the tree and the cock never fell on the ground.

READ: Locations and uses of Anunuebe leaves, bark, and soap.

Read also About Anunuebe Seeds; the types and medicinal uses.

I have not seen Anunuebe trees or gone closer to it but I have seen the bark. I was brought up by my grandparents who were traditionalists. I have seen my grandfather applying Anunuebe’s bark on children who were convulsing. Immediately he poured the water on them, they jerked up and became conscious.

I have also seen him gave Anunuebe’s leaves to his clients who claimed they have been poisoned by their enemies. he asked them to chew the leaves. They came a few days later, testifying how the leaves cured them, how they vomited the or excreted the poisons.

Anunuebe’s barks and leaves are very potent. Its bark and root are widely used in the preparation of potent charms. It’s gotten by approaching the tree from a distance, while a live rooster is thrown at it after series of incantation.

The mysterious features of this tree distinguish it from other trees. Right from my childhood, many tales have been told about this tree.


A closer look at the stem will reveal patches. Yes. They are patches from machete’s cut by medicine men.

The bark is used for the preparation of powerful charms. The barks and leaves are obtained by powerful native doctors like my grandfather and the one described by the first testifier above, who have the power to dictate when it is less powerful to go closer. 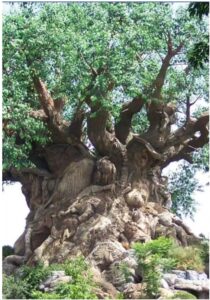 It gets its name by its feature which means nothing perches or birds can’t perch. Look around the tree, no living things survive under or above it. No tree can sprout near it and survive. No birds that fly above it survive.

It is a giant and mystical tree that stands and survives alone.

One thing beneficial about the Anunuebe tree is its medicinal potency. It has some medicinal value as some healers and medicine men make use of its leaves, roots, or bark to cure different illnesses.


Finally, this is not the first time I have written about Anunuebe tree. In fact, this will be the third time. Each time I write about the this mysterious tree, the readers are always asking one question, which is; “where can I see Anunuebe Tree? Anunuebe tree is in Igbo and Yoruba land. In Igbo land, you can find it in Anambra State. If you are at Nnewi, Nawgu, Okuzu, Ukwullu, you are closer.

Thanks for reading. Remember to always check on us at 9jainformed.com to ask your questions and check for more updates.