Corpse tied on a Bike in Congo and drive to the Morgue. Massive reactions on the internet trail a video that surfaced from Congo about people transporting their corpses. See the Strange way the people of DR. Congo move Their Corpses to the Morgue.

ATTENTION: READ ABOUT PEOPLE IN KENYA WHO BURIED THEIR CORPE IN A SITTING POSITION.

It is still surprising to know that there is still a country in West African that is still backward in practice especially as it concerns human life. We saw this in Dr. Congo in the way they transport their corpse to the Morgue. We saw the terrifying way corpses are carried on the bike to travel a long distance to be deposited in the mortuaries.

In this article, we are going to show you pictures of dead people sitting on a bike. At first, you will think it a normal human being sitting on a motorcycle. I saw these photos and I shuddered.

I thought I was aware enough about the worst of poverty. But I recently came across how deceased people are taken from villages to the morgue in some remote areas of D. R. Congo.

As they cannot afford to rent a hearse to take the body (the morgue being located very far from the village), people decide to wrap it with fabrics then they seat it behind a rider, so the rider takes it to the morgue to get it stored there. The trip can last 10 hours in some cases if the village is very far from the city. 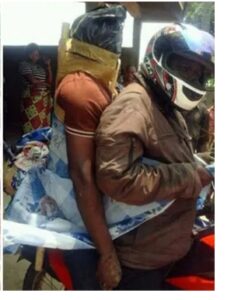 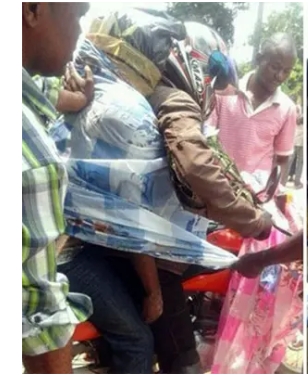 That’s another sad face of poverty in rural areas of the world. It is a weird world.