A social media user has given an epic reply to a lady who posted a pot of soup she cooked with just two round strings of onions. The owner of the stew said; “when you cooked stew without onions”. 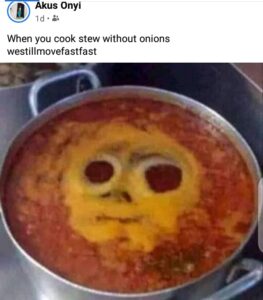 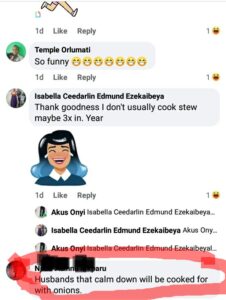 
Those who are affected most are the mothers and wives who go to the market daily to buy food for the family. We now cook soup with a very small quantity of onions or even without onions sometimes. 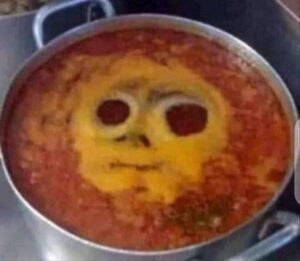 This is hilarious. Does it also mean that this lady’s husband is not calming down? Men should learn to calm down this period so that their women will be cooked for them with onions. Soup that is cooked without onions is as scary as the image we see inside this pot of soup.

But on a serious note, I don’t understand this face of this woman’s soup. Is it the absence of onions that made the soup look that way? Look at the picture again.

I am seeing two rounded slices of onions in the soup and that is what probably formed the two eyes in the soup. But then, what about the nose and the mouth? Click on the original and tell me what you think about this soup.