Did you eat sands as a child? Have your kid eaten sands? Gather here let’s have a talk. 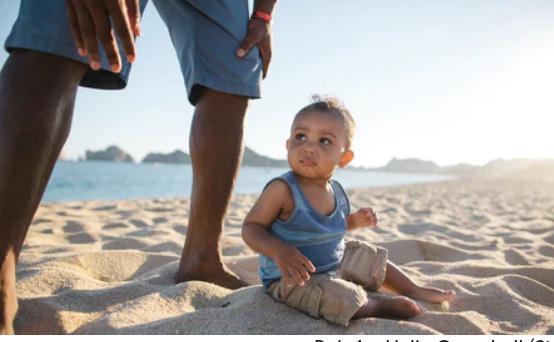 If you did not eat sands as a child, two things are responsible. Is either you were born with a silver spoon or your parents were living in story building where sands were out of sight.

These were actually the categories of people that escaped sands eating. No matter how educated parents are or their location, once they expose their little babies to sands, it is for eating.

Sands eating is not for black children alone. The children of the Whites eat sands too. They have a different understanding of this habit though. They call it Pica which means craving for dirt. They use the word “dirt” for the sands.

Children or babies like eating sands. Why they do that is what I can’t understand. I have seen children as old as 4 or 5 years yet they eat sands. No matter how their parents rebuke them, they go to hideouts to feed on sands.

My parents traveled to the village a few weeks ago, upon returning, they brought home a 2-year-old child. The baby is related to Mom. When we asked why she brought her, we were told the mother left the baby and her little siblings and ran away.

Ever since the child came to our house, we have noticed that she usually picks invisible foods on the air and eats. How do I mean? She uses her hand and takes invisible food from the air, consciously or unconsciously, and puts in her mouth, munch it. At first, we didn’t take it to mean anything. My parents dismissed it as having daydream and playing with her fellow kids.

Why she munches invisible food was what I couldn’t explain. I wasn’t comfortable with the habit.

A week later the baby fell sick. It was severe that my parents took her to the hospital. It was on the hospital bed that her invisible feeding became very open and gave my parents concern for the first time. Even the patients who were in the same ward with them were uncomfortable.

My parents drew the doctor’s attention and after much deliberations and guesses, it was confirmed that she was suffering from an addiction to a substance.

The first thing that came to the Pediatrician’s mind was sands. He was right!

The little baby was a sand addict. No one could say how long and how much sand she had eaten. We took her to the sandy ground when she was discharged from the hospital. How she dived to the sands and filled her mouth with it shocked all of us.

She was truly suffering from an addiction. We have taken her away from sands for too long to a city, in a tiled and plastered environment. All the while she was eating from the air, it was a hallucination. She was actually feeding on invisible sands.

The question now is, why do children feed on sands? Why do they like feeding on sands? Who is to blame in this case? Should the parents be held responsible? Is there any benefit for sands eating in children?

I will try to provide answers to two questions and leave others open for general contributions. I may not give all the blames to parents for the children who feed on sands. No matter how careful parents are, as long as they are living in the village, in open places, these babies must eat sands.

Children who eat sands are exposed to all manner of diseases but at the same, they are immune against catching diseases. This dirt they put into their mouths act like soldiers against the reactions of infections which their body systems will come in contact with in the future.

Where I am not comfortable with is when the child becomes addicted to sands. In this case, the child will look jaundiced, lost appetite for food, and craves for sands always, as with the case of the child in my house.

It took us two whole weeks to rehabilitate the little baby. Mom didn’t take the sands away completely from her the moment she found out. She introduced her to Zink stone (Ulo) and calabash chalk (nzu). Both are families of sands. Little by little, they have been replaced by Caprisonne.

Can I Use Mupirocin Ointment on an Open Wound?

Is Mixing Milk and Malt or Tomatoe Paste a Source of Blood Tonic?

5 Secrets Velvet Beans (Werepe or Devil Beans) you should Know

Chinen Salt: Where To Buy, How To Use And Side Effects Explained

Can Someone form  Resistance To HIV Infection? Yes, Find out How

“Beauty Infusion Supplement”, True or Scam? What You should Know Before Using it

Uses of Sheep and Goat Feces (Poop) as Coffee and Drinks – True or False?