A disturbing video of the corpse is circulating on the Internet over missing parts of a dead patient of a New Mayor Hospital in Iyienu Ogidi in Anambra State. The family members were seen standing in the front of the hospital calling the attentions of the hospital management and the passersby.

The video which was shared by wonders shall never end and captioned; “Is this real?” shows a dead man wrapped with leather, waiting to be put in a coffin. Both nostrils of the corpse were chopped off and the skin of his forehead scrapped. 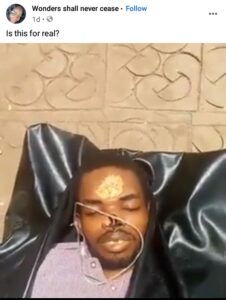 When the diseased family opened his legs, they also discovered the toes were missing.

We are yet to find out the reasons for the missing or the removal of the dead man’s parts. But from the video, the family alleged they were told it was a rat that ate the dead man’s body parts.

We could hear them asking if a rat eats a dead man? Their cries attracted neighborhood and village security who showed up with guns. The family demanded to see the doctor who owns the hospital but they were told he was not on seat.