The popular Nigerian Nollywood actress and celebrity, Miss Genevieve Nnaji trades words with River State Governor, His Excellency, Nyesom Wike over the alleged ban of #EndSARS Protests by the Federal Republic of Nigerian and the subsequent announcement by the governor.

Governor Nyesom Wike made an open statement this morning inform of order. He said he has banned all manner of #ENDSARS Protests in River State. He said further that anyone caught doing further protests will be prosecuted.

Genevieve Nnaji tackled him on Twitter and asked; “do you have children?”. She frowns at Wike’s order and called it a dictatorship trait. 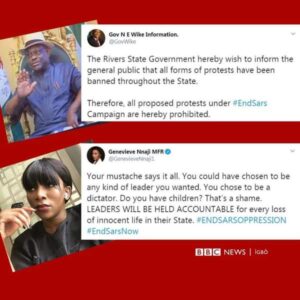