Shootings are ongoing for over 30 minutes. Division b Police Station, beside State Secretariat, Attacked. INEC Office in Awka Anambra state set on Fire by Unknown Gunmen.

There is tension in Awka the state capital of Anambra state as the unknown gunmen strick, set the INEC office ablaze. According to residents who revealed this information via social media, shootings are ongoing at the state secretariat for over 20 and 30 minutes by unknown gunmen.

When 9jainformed.com reporter put out a call to one of the residents of the area, he confirmed the incidence. The resident whose identity will remain undisclosed said the Police division B beside the state secretariat is under attack.

A social media user, Comr TC Menakaya has also confirmed the Awka shooting in his post which he made a few minutes ago. Here is the screenshot. 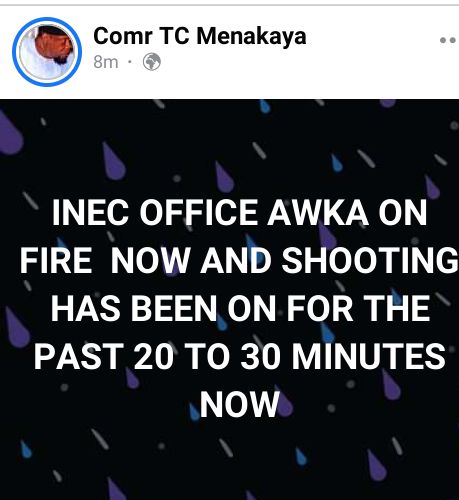 Attacks on police stations are now the order of the day in the east by the unknown gunmen. Shootings and setting ablaze of the public property are now the everyday news.

Just last week, the INEC office was also set ablaze in Enugu by yet to be identified person. I mean the cause of the fire outbreak is yet to be unraveled.

The fire outbreak which did not see the light of the day in the media was said to burn about 14 vehicles at the INEC office in Enugu and some other important documents. Investigations are still ongoing to unravel the cause of the fire outbreak.

Friends and relatives are calling out to their loved ones who are residents in Awka capital to ask for their safety. Many have also taken to social media to warn travelers to avoid the route.

As of the time of filing this report, shootings are still ongoing. We will bring you more updates on this. SUBSCRIBE TO NOTIFICATION to get all the news updates.